Martin Cassini is an interesting gentleman. He thinks removing traffic lights will magically make traffic move better. Perhaps it does, but at what cost? 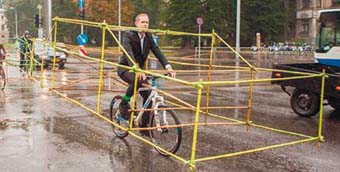 Take an example of a place where they have removed traffic lights: Ashford, Kent. They removed some traffic lights and remodelled a junction to make things appear to be ‘equal’. Equal is such a lovely word. You can throw it into any conversation to give yourself a feeling of the moral high ground. Traffic did move better, but fewer people walked. So more pollution, and less economic activity. This so-called equality appears to be a bunch of automobilists wanting more space for cars and less space for everybody else.

According to Martin Cassini, a researcher into transport issues whose data needs closer scrutiny, 69% of people choose to drive into Cambridge. Unfortunately that is not true. According to the 2011 Census data, only 50.1% of people drove from their home to their work in Cambridge. 40% of people took a bus, walked, or cycled to work. The rest worked from home, were driven in a taxi or similar, or took a train.

In some places, the numbers are much more dramatic. There are 26,445 people who work in the city centre and the main university areas to the west. 53.2% of people cycled, walked or took the bus to work. Only 36.0% drove a car. Sorry, but cars are a minority in Cambridge. Do we want to force people not to walk by removing traffic lights now?

Of course, the folly of this argument is to think that the above numbers matter. They don’t. The numbers just don’t add up regardless of the percentages. We could widen every road to allow more cars to move around, and build multi-storey car parks to park all those cars. Where would you put the 23,000 car parking spaces that would be needed in the city centre? And to allow all these cars to arrive into town during rush hour, every road would need to be three lanes wide in each direction. This would require the knocking down of lots and lots of houses and removing all the trees. Do you really want this?

Mr Cassini appears to suggest that enabling more private motor vehicles would be a good thing. I’ll quickly ignore the fact that air pollution is currently terrible, because technology such as electric cars may reduce that in the long term. I ignore it because private motor vehicles are the single most inefficient use of space when it comes to moving people. If we have limited space, and I hope you agree that we do, then adding more cars on the road is not a good solution. It doesn’t matter if turning off traffic lights will move more vehicles or not. We should optimise this city for people, not cars.

We need to help move some people from cars onto buses, cycles or to their own two feet. Moving people from space-wasting ways of moving through the city to space-efficient modes. That is the only long-term solution. Having a bias towards buses, cycles and pedestrians is not ‘anti-motorist’, it is just removing the existing over-allocation of space to private vehicles and reallocating it equally for everybody.