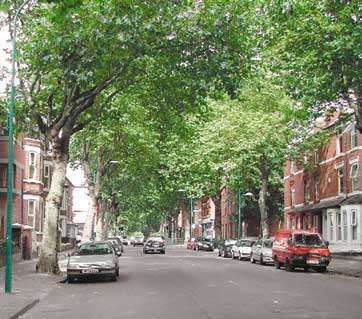 People are attached to trees, especially the ones that are close to where they live – and with good reason. Trees improve urban environments in many ways – they provide shade, they screen homes from the sound and sometimes even the intrusive view of cars, they can provide nesting sites for birds, and flowers, fruit, or even just a bit of greenery can liven up an otherwise dreary roadscape. Trees also improve drainage thus reducing flood risk, and can give an area a ‘mature’ and ‘looked after’ appearance that makes people feel comfortable in their environment in exactly the way that the never-ending stream of poison-spewing engines doesn’t.

So it’s unsurprising that people get attached to these great living things in their neighbourhoods – trees become ‘friends’ in our environment as we watch them grow, change through the seasons, grow leaves, flower, fruit and shed their leaves in autumn. Indeed, the very same people who’ll buy palmoil packed processed food from destroyed rain-forests will chain themselves to dying cherry trees next to their own home. But I digress.

That we get attached to the trees around us doesn’t mean that we should throw all sense out of the window when deciding how to manage our road spaces. Where trees were first planted 50 or 100 years ago on roads initially intended to handle a quarter of the (radically different) traffic we have now is not necessarily the best place for them now or in the future – and the type and shape of the trees may not be at all suited to how we live now. But that’s perfectly fine on most routes in and around the UK where, for the most part, we’ve got plenty of room to improve our urban treescapes.

Now very often, when we’re looking at road improvement schemes, planners are very keen to make changes for motorists and buses, but reluctant to make any serious changes for cyclists. Very often, indeed, we’re told that there’s no space for cycle facilities on a road so we’re relegated to fighting pedestrian and residents groups for an ever-dwindling amount of room, a fight we’re doomed to lose when faced with a never ending stream of NIMBYs who we’ve no hope of out free-timing in campaign terms.

When it comes down to it we’ll rarely want to see treescapes removed to make room for cycling – but it isn’t uncommon for the current location or type of trees to be inappropriate for fitting in decent bike routes. We shouldn’t hold back from demanding good bike routes just because of this – in fact this is even more of a reason to campaign, as very often there is massive room for improvement in the planting schemes we have.

You may think this sounds crazy, digging up mature trees and planting new ones, but bear with me – this is best viewed as an opportunity, not a weakness.

Let me introduce you to the city of Nottingham (photo) – not always thought of as a model of modern road design, but in one important respect it is vastly ahead of most of the rest of the UK. An extraordinarily prescient set of urban planners in the 19th century started producing some of Britain’s best tree-lined roads. What’s most interesting about these roads is the kind of trees they chose to plant – influenced by some of the great boulevards of France, they selected trees with a great scale – linden and plane in particular, but also trees like horse chestnut – and which are, crucially, superbly well suited to urban conditions, being resistant to pollution and disease, and which thrive when treated harshly – so they can be pollarded (the upper branches cut back), extending their life-spans massively.

When we compare those trees with the more regularly planted urban fare (for example cherry, whitebeam, silver birch etc.) many advantages are apparent – they have a longer lifespan, provide far better shade, give an even better and more mature look to an urban environment and, crucially, they provide a superb habitat for wildlife – birds, insects and fungi thrive in and around them.

The opportunity to re-assess where trees are to be on our roadscape so that we can fit in top-quality cycle lanes is also an opportunity to create better urban tree-planting schemes – unless a road already has a gold-standard tree scheme, then on every occasion the replacement of trees (often unhealthy trees suffering due to disease or pollution, of differing ages and sizes, planted piece-meal with little oversight) is a golden opportunity to make a better urban space.

Top-class cycle infrastructure makes for better cities, by giving us options for clean, fast, healthy transport, and indirectly by increasing the separation distance between pedestrians and cars. But it’s also an opportunity to improve our environments in indirect but no less important ways – the bottom line is that installing cycle facilities is a huge opportunity to improve environmental quality in all sorts of ways.

So how do we convince those so attached to their trees that better cycle infrastructure and treescapes are not incompatible?