I recently had cause to visit Barcelona and took the opportunity to survey its new bicycle infrastructure, which it has been creating at a fast rate in recent years and is not yet on OpenStreetMap.

I was amazed at what it appears to have achieved in a short space of time, at relatively little cost.

Barcelona has created a significant cycle network, along main roads that are otherwise heavy with traffic, by introducing light segregation, quickly.

Light segregation is where a path is created by dedicating a section of a road for cycling, but not by using cheap white paint or by extensive asphalt kerbing that need a lot more money, but instead by using blocks, poles or ‘Armadillos’. These can be added cheaply and quickly. By providing this protection from traffic, more people are given the choice to cycle very quickly and, in time, this segregation can be turned into more physical barriers that give additional protection from traffic. The degree of light segregation is a clear indication of a cycling culture emerging: it was very encouraging to see Bakfiets-style bikes in Barcelona.

Cycleways through the city

Key streets – long stretches, not isolated sections – had been altered to give a lane over to a cycle track, usually one-way tracks.

Two key cycleways (shown on the map in blue) run for two miles through the dense blocks running past the University area. They have transformed cycling conditions here, with light segregation and crossings at every junction.

At the junction points, the lane was marked all the way through, sometimes in red. Many of the junctions had an orange light just before the crossing, allowing cyclists to proceed if the pedestrian crossing and subsequent intersection were clear, which made a big difference to journey times and ease of cycling.

One or two junctions had a ‘protected intersection’-style layout, very common in the Netherlands and also being tried in various US cities. The concept is that the actual crossing point over a wide junction is minimised, and people cycling cross at right-angles to traffic.

On busier roads, two-way tracks have been used. For instance, Parallel, which has several lanes of busy traffic, has a 3m-wide cycle track in the middle, running its entire length of a mile and a half. 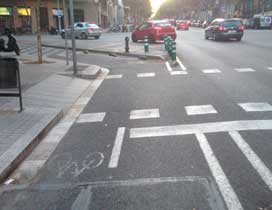 This seems to have been created by making a much smaller central reservation and making the car lanes slightly narrower. Despite this proximity to traffic, it did seem to work, and all the crossing points enabled you to get to it relatively easily.

I wouldn’t call this international best practice, and I wouldn’t like to see it on Cambridge’s nearest equivalent road, Newmarket Road (where proper Dutch infrastructure is entirely achievable), but it does show what can be done, quickly and cheaply, to achieve segregated infrastructure.

I even found what the Dutch would call a ‘bicycle street’ – a street where motor vehicles are permitted but are guests, with the main users being people cycling and walking. 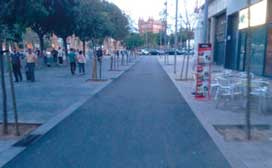 Barcelona was one of the first cities to introduce a modern-day public bicycle hire system, called Bicing, in 2007. Like London, the first half hour is free, and beyond two hours users are heavily penalised. The bikes don’t have the same very solid and hefty appearance of the London cycle hire scheme’s bikes, but seem sufficiently robust.

So I was keen to give this a try. Unfortunately, as I discovered, the Bicing system is not available to tourists (apparently owing to lobbying from local cycle hire shops) – Bicing member cards are only posted to Catalonian addresses. So I found a hire shop instead.

The widespread presence of people cycling with the bikes seemed to add to the sense of a cycling culture emerging around the city. I saw a lot of people using the bikes, which are plentiful, with over 6,000 bikes available at 420 stations. There are also a small number of electric bike stations as part of the scheme.

Go to www.opencyclemap.org and search for Barcelona, to get a sense of the continuity of cycleways in Barcelona.
You can see hundreds of photos on the CycleStreets Photomap www.cyclestreets.net/photomap/tags/barcelona/
My experience of cycle paths in the middle of the road is here cycle.st/p81704.
2014 photo review of Barcelona’s cycle infrastructure for Cycling UK www.cyclinguk.org/blog/robinlovelace/barcelona-bike-campaigners-guide