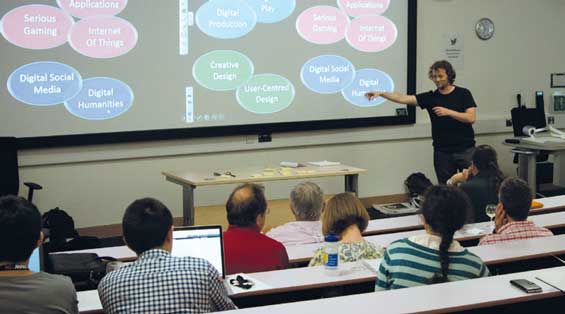 CycleHack: hosted at the East Road campus of Anglia Ruskin University, this three-day event began on 24 June from 6pm. Simultaneous events were running in other cycling cities around the world.

The stated aim of the weekend-long event is to build something to do with fixing cities to make cycling better. What actually happens is that people come together for a weekend and have a go and learn about the challenges of making cities more cycle-friendly. The CycleHack twitter feed was a stream of photos of people gathered in workshops assembling contraptions to be mounted on bikes, or sitting in front of laptops. Our group definitely fell into the latter category.

Cambridge resident and embedded software engineer Leo Zhou created a program (we’re more likely to use the term bot or app now) to automatically extract the latest week’s reports of problems from CycleStreets, the photo and the location map, and send these to Noel and Anna. It was very pleasing to see CycleStreets being used in these ways, and shows what can be done in a short space of time.

For CycleHack I wanted to focus on the problem that there are a lot of reports on Cyclescape of problems with Cambridge cycle routes, but these don’t necessarily reach the decision makers who can effect actual change. To solve this I decided to send the user reports as a weekly newsletter to the city and county council. I used the CycleStreets user reports API to get the reports which users had submitted to the site in the past week and compiled them into an email. This email is now set up to be compiled and sent automatically every week. Hopefully this will help direct attention to the issues that CycleStreets users care about and are suffering from on a day-to-day basis.

Robin had a project to produce a live simulation of where cyclists were riding in the city based on openly available data. He took census data which give an idea of where people live, where they work and how they commute. He used CycleStreets to plan all the journeys that they would make within a day – based on some estimates of when they leave for work and when they come home. Data from automated cycle counters were also used to calibrate or check the figures. The outcome was a short animation of a map of the Cambridge area overlayed with dots, each dot representing a commuting cyclist. The animation showed the time of day and the dots moved towards and around the city. It was an impressive result from a couple of days work.

A core group of six of us went to all the sessions and it was clear we all enjoyed and benefited from networking. We are grateful to Anglia Ruskin and the Cultures of the Digital Ecomony Research Institute (CoDE) for hosting this event and I hope we can do this again next year. In future I’d expect there might be live hookups with other CycleHacks around the planet.