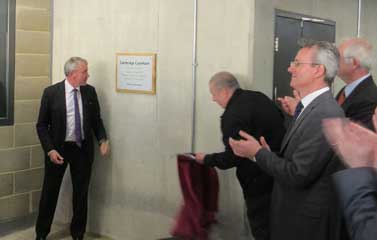 Yes, we all know that it has been open for months, and that it is by far the biggest in the UK (is there a United Kingdom?), but Monday 27 June saw the opening ceremony with the great and the good, including myself and Robin Heydon representing Camcycle.

Deserting the headless chickens and avoiding a Cabinet meeting in London was Robert Goodwill, Minister of State at the Department for Transport who formally opened the Cyclepoint by unveiling a plaque in the entrance (above).

This building represents over 20 years of campaigning by Camcycle. In 1997 the Campaign awarded WAGN (West Anglia Great Northern, then the incumbent Train Operating Company or TOC) a ‘Chocolate Chain’ not just for the inadequate amount of cycle parking, but for the attitude to the issues such undersupply created.

Over that long time Clare Macrae, David Earl, Martin Lucas-Smith and myself have been among those who have attended meetings about various Planning Briefs and Plans. Numbers of city and county officers have also devoted much time to this project. We have had plans with parking both north and south of the main building distributed, development company Ashwells collapsing, and the current entity Brookgate eventually delivering the building, with considerable help from the Department of Transport.

Of course, even though the formal opening is over three months after the first public use, it still is not finished. I’m told that promises had been made that the façade and the groundworks would be complete, but there were still men in hard hats and with shovels, and hoardings still obstructed much of the front of Rutland Cycles’ now not so new shop.

It is not acceptable that the ground-floor area, supposedly reserved for tandems, cargo bikes and the disabled, should be stuffed with ordinary bikes.

Where a large new sign should proclaim the facility there is still bare steel and wood and it’s clear from the mess in front of the station that many local cyclists are not yet aware of its existence.

Some of the signage and management issues are no doubt due to the imminent change of franchise for the West Anglia area. By the time you read this we should know who is the new TOC, and clearly Abellio would not wish to make decisions that could have longer-term implications at this late stage.

It is very disappointing that it is taking so long to complete the access routes. Only once the hoardings around ‘One Station Square’ are removed, and the taxis start to use the new rank, will it be possible to asses the effectiveness of the planning in this area. It should be possible to cycle north to south (and south to north…) through the area and cycle right up to the entrance of the cycle park. We need to be vigilant in ensuring that this is a safe and pleasant place for those on foot or bikes, and that future changes do not make sustainable access more difficult.

Signing and management are issues we will need to raise with the new TOC.

Others have suggested that anyone who leaves a bike for more than 24 hours should have to leave it on the second floor. As the park fills up it is likely that there will need to be some form of enforcement to ensure bikes are not left ‘long-term’ even if the owners have not abandoned them.

PlusBike lets you know where to park

Now that the new CyclePoint has opened at Cambridge station it makes leaving a cycle at the station both easier and safer. This makes the ‘two bike’ system so commonly used by the Dutch far easier. With more overcrowding on trains it is inevitable that there will be more trains on which restrictions on non-folding bikes apply.

Improved cycle parking as well as available cycle hire and initiatives such as PlusBike all work towards encouraging commuters to cycle part of the way.

PlusBike is a new addition to National Rail Enquiry apps and web platforms and was funded by the Department for Transport. It aims to make it easier for both existing and new cycle-rail passengers to find out quickly about the number and type of cycle parking spaces and level of facilities at any given station. It will also link them directly to any existing cycle hire scheme available near the station.

Our early tests have shown that some of the information is not up-to-date and that there are a number of usability issues. We will pass our feedback on to the developers and we hope that following rectification of these issues PlusBike will become a really useful resource for train users who wish to combine their journey with cycling.