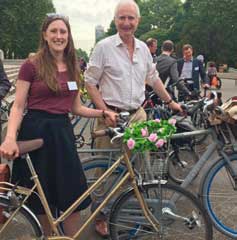 Daniel Zeichner MP for Cambridge and I joined MPs and other cycling stakeholders for a bike ride from the Dutch Embassy to Parliament. We began with breakfast and speeches at the Embassy, the highlight of which was the Dutch Ambassador claiming that he was simply a ‘MAM’ (Middle Aged Man) without the ‘IL’ (In Lycra).