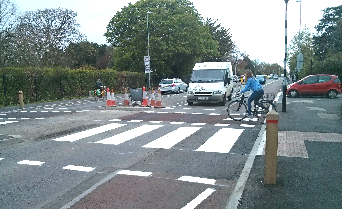 A new cycle priority crossing on Huntingdon Road has been made possible by The Traffic Signs Regulations and General Directions 2016 which came into force on 22 April 2016. Referred to officially as the rather non-specific ‘parallel crossing’, informally people refer to it as a ‘cycle zebra’. People can cycle across without having to dismount, and have priority over road traffic.

A very attractive one for two offer on the Guided Busway path. This single bollard with reflective red strip replaces the two smaller ones nearby and is a very welcome upgrade given past cycle incidents: www.camcycle.org.uk/newsletters/123/article12

I was greatly pleased when the path on Midsummer Common approaching the cycle and pedestrian crossing over Maids Causeway was resurfaced, as it had become very dilapidated. Unfortunately however, the painted ‘person’ and ‘bicycle’ symbols and white line, which used to be on the path to inform users of the cattle-grid-free and bicycle-free pedestrian crossing which is separate from the dedicated bicycle crossing, never got repainted.

This has lead to confusion and conflict, as an increasing number of unknowing pedestrians pick their way over the cattle grid, leading to holdups at this busy crossing. I reported this as a highway defect some time ago as it was surely an oversight at the time, and seemed quite simple and cheap to rectify and get these vital markings replaced.

I did not hear back and so contacted Ed Cearns, county councillor for Market ward and vice-chairman of the county council’s economy and environment committee, on behalf of the Campaign.

I was delighted to receive a prompt reply from Cllr Cearns, and subsequently from Stuart Rushby, of Cambridgeshire County Council, who apologised that these logos had not been re-instated. He has promised to arrange for cycle logos / arrows to be applied either side of the cattle grid, as well as a pedestrian logo to direct people towards the gates. The cycle logo at the entry / exit from Walnut Tree Avenue will also be re-painted.

Hopefully just the logos alone will be sufficient to alert unwary pedestrians of the wider and easier pedestrian route, and prevent pedestrians being caught amongst stationary and moving cyclists. Certainly excessive segregation by paint on the paths proper on the Common is unnecessary and probably harmful; however where pedestrians and cyclists are a) fenced in and b) grouped by traffic lights some sort of suggestion might make things run more smoothly.

That’s what makes the crossing across Midsummer Common so tricky -there’s no-one going at all, then a big bolus of everything in all directions all at once, then nothing again.

In the longer term, perhaps an upgrade of the entrance to the Common for pedestrians should be considered? Despite the lack of painted cycle logos the new arrangement at Walnut Tree Avenue, with a dedicated wide gate and cattle grid for pedestrians, seems to work well with fewer pedestrians using the cycle cattle grids.