You may be aware of the idea of the London ‘Cycle Superhighways’: major cycle routes from outer London into and across central London.

In the past this has meant liberal use of the notorious blue paint: routes where a bike symbol and a blue lane is the only indication that you should cycle on a route, with no protection from vehicles and infrastructure which gives up at difficult junctions.

But this is changing. Some of the most recent work is creating fully segregated routes, where people can cycle safely side-by-side, and children can cycle with parents without fear of danger from motor traffic.

At the beginning of April I visited London on a cycle infrastructure safari affiliated with the Cycling Embassy of Great Britain to see some of the new work. http://www.cyclingembassy.org.uk/news/2016/03/22/london-cycleinfrastructure-safari-with-ranty-highwayman-2nd-april

Several of the routes were still under construction, but it was possible to see enough of how these will operate when open. Each route seemed to be treated differently, which is good for solving local issues or experimenting with different solutions, but bad for consistency across a network.

I won’t attempt to summarise everything I saw, but will report on a few features I found interesting. Keep an eye on the Cycle Embassy of Great Britain news for more tours in the future if you want to see it for yourself.

Campaign member Matthew Danish also attended, and has put up video of what we saw on the day https://www.youtube.com/watch?v=fzG0JnwcDSU 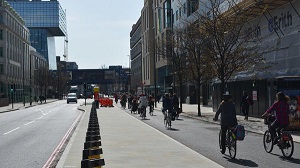 In Newsletter 123 I outlined some of the difficulties involved in using two-way cycle lanes on one side of the road, and particularly that attention to detail at junctions is essential to make them work. Many of the new cycle routes in London are two-way segregated tracks. In some cases this is because there are no side roads, for example along Embankment and across bridges. However, in other cases there are large side roads, and junction treatment has not been ignored. Cycle-only signals separate motor traffic from people cycling in space and time, removing the most dangerous interactions from the system. Seeing people cycling on such routes on main roads, it is hard to believe that this is in Britain. 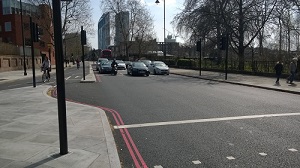 Here the two-way segregated track rejoins the road network on a one-way street for a straight-on or left turn, but from the right-hand side of the road. If the designers had given up at this point, you would be left merging with traffic from the wrong side of the road, rendering the safety and ease of the segregation pointless. The space between the two stop lines is actually a kind of advanced stop box. On one’s right is a cycle-only signal, which goes red when road traffic is moving or about to move. When traffic is stopped, this light is green, allowing people on bikes to fill the advance area and position themselves for wherever they need to go. This solves one problem with advance stop boxes: that getting into the correct position can be difficult and dangerous, especially if traffic starts to move before you get there. 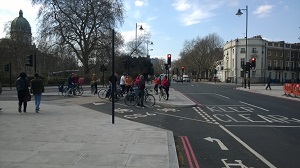 Where interaction is only between people cycling, or the cycle track is joining a low-trafficked route, signalised junctions are an unnecessary expense. Here the two-way cycle track joins a road which is a through-route only for buses. If you are turning left you are only meeting cycle traffic so there is a ‘free left’: no wait for signals required. If you are joining the road, it is quiet enough that there is simply a give-way. 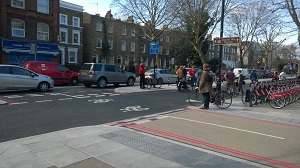 Here there is private parking on the other side of the two-way segregated cycle track. In this particular example the waiting space for cars is shallow: a car would have to partially occupy the road or the cycle track while trying to get in or out. We saw other examples which were full car depth, which requires additional road space. However, other features are good: the cycle markings are repeated at the junction to make it obvious that drivers are crossing a cycle track, and the give-way markings are clear. The kerb gap is not excessive, encouraging slow speeds in and out, rather than corner-cutting. Even though the tracks are still a new idea for London, every driver we saw was waiting and giving way correctly. 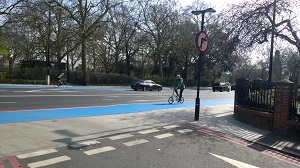 CS5 uses one-way raised cycle lanes similar to the ones we have on Hills Road and Huntingdon Road, painted the distinctive CS blue rather than our red ones. The reason I am including here something which we already have in Cambridge is for the side-road treatment: the pavement as well as the cycle lane continues across the side road, giving priority to pedestrians over motor traffic. This also means that people using wheelchairs or prams or wheeled suitcases have a continuous level surface, rather than hunting out poorly configured dropped kerbs. This contributes to an environment where speeds are slow, so this also helps cyclists. 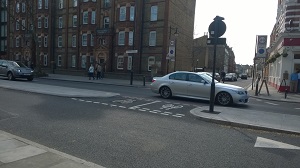 If you’re on a kerb-segregated cycle route, how do you leave it to turn off into a side road? Here a waiting space means that the cycle route is not obstructed while waiting for a gap in traffic (or a gap in cyclists to join the track!).

I was unreasonably excited by this sign on CS6. It was positioned at a good distance before the junction, and I thought was particularly clear on how to negotiate the junction on a bike. 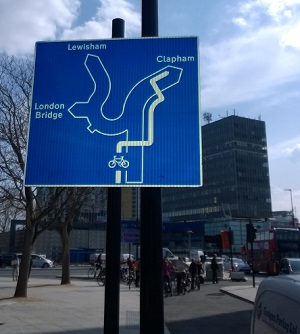 While you could argue whether this was the best way to configure the junction for cycling, if your cycle route is significantly different from the normal on-road route, it needs to be obvious how it is different.

It is worth noting that not all of every Cycle Superhighway is completed to a high standard, and that these routes are still only a fraction of the whole London road network. Moving between sections of the network was often uncomfortable and confusing, and would exclude anyone not willing to cycle in heavy traffic. However it does show that these things can be done in Britain, with our road rules and signage, where there is the political and officer will to do it.