This isn’t an advert for ‘Outspoken’ or any form of cycle-logistics in urban areas, but an attempt to explain what is going wrong with logistics nationally, and how it impacts (hopefully mainly metaphorically) on cyclists, vulnerable road users, car drivers and local authority infrastructure.

The photo opposite is one I took at the junction of Market Hill and Sidney Street in Cambridge. It is of an articulated lorry with a 13.6m-long trailer. It had been along Trinity Street to deliver a package to Heffers, one which clearly should have been addressed to their warehouse. The package would have fitted into a light van!

It isn’t clear on the photo but the strapline on the trailer is the title of this article.

So what is a 38-tonne lorry doing delivering a package of a few kilograms in the narrow shopping streets of the historic core? The answer is that it is doing nothing illegal, and without better regulations such things will continue, and could get worse.

The strapline for a company that permits such inappropriate use of large vehicles should clearly be: ‘Logistics at its Worst’.

The off-tracking of long or large vehicles can cause damage to footways, street furniture, adjacent fences, walls and even buildings. Cars are at risk and in Cambridge a number of years ago a pedestrian on a footway was killed when crushed between a wall and a ‘lost’ supermarket delivery vehicle.

Could it get worse?

This brings together three threads of interest to me over many years:

It is possible to have Traffic Regulation Orders (TROs) that restrict vehicles by size or weight on ‘environmental’ grounds. A few do exist; however, compliance is very far from perfect, and the police lack the resources to enforce them. Without civil enforcement such restrictions will continue to be ineffective and hence little used.

Did you say it WILL get worse?

For two years there has been a trial of even longer trailers (known as Longer Semi Trailers: LSTs). These are over 2 metres longer still! Currently this is a controlled trial with the vehicles supposed to be used on trunk routes between major logistics centres. It would not however be illegal for such vehicles to use Trinity Street!

The Campaign for Better Transport and the Local Government Technical Advisers Group (TAG) has serious concerns over the dangers should such vehicles find their way onto inappropriate urban roads, especially if more general use is permitted following the trial. Although such articulated vehicles must pass ‘Construction & Use’ regulations, on the tighter corners found in urban environments the kick-out at the rear is much larger as, in effect, all the extra length is to the rear of the trailer axles.

Has London got it cracked?

Not quite, but there is a night-time HGV restriction which allows lorries to use the TfL strategic road network, although permission is required from the appropriate borough to use local roads to access any depot or other unloading location. It would seem to be easy to have a similar system 24/7 for these LSTs.

What about driverless lorries?

I’m a cynic about driverless technologies, but just by using a well-tested part of that technology we could control HGVs better. Many drivers are used to just punching in a destination into their GPS, and blindly following the instructions… it would be relatively easy to produce a GPS for HGVs of any class such that drivers were not routed down inappropriate roads. 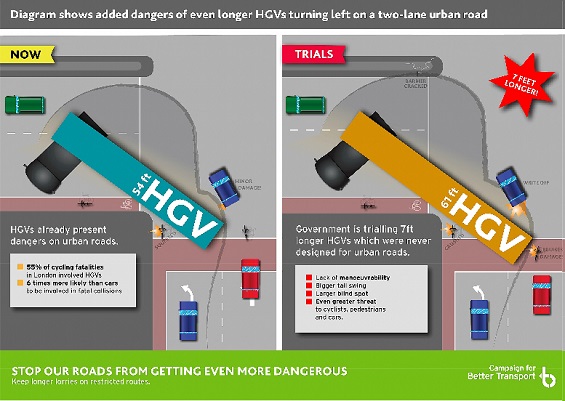 If the DfT really thinks such longer lorries are a benefit it could easily avoid the dis-benefits by using a trial GPS system that permits such LSTs anywhere on the Highways England Strategic Road Network, but only permits their use on other roads where the controlling local authority deems them suitable for such extra large vehicles.

Is there a local issue?

In the past there has been damage to signals and signal poles at the Trumpington Road/Long Road junction which has since been redesigned.

It is most likely that it was caused by the outswing of a 13.6m trailer.

The Royal Mail operates such trailers and has a Clifton Road depot. Such articulated lorries can be seen on occasions.

13.6m trailers have been seen doing the left-turn from Hills Road into Brooklands Avenue. They require 3 lanes in Hills Road, and use not only the left-turn lane, but also the centre cycle lane and the straight-ahead lane.

The depot manager has been asked if a safety audit for these trailers on this route has been conducted. Customer Service replied: ‘I have been assured that no incidents have occurred when vehicles have used the junction and therefore the routes which are currently used will not be changed’.

Royal Mail is using 15.65m LSTs elsewhere. Let us hope that systems are put in place that mean they never come to Clifton Road.