Daniel Zeichner, Labour MP for Cambridge and Shadow Minister for Transport, presents his views on government investment in cycling 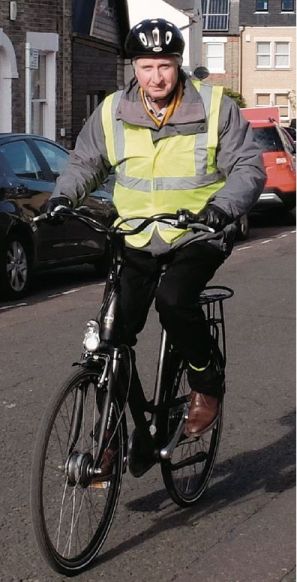 In Cambridge cycling is not just a mode of transport, but a way of life. While cycling still only accounts for 2 per cent of all journeys nationally, in Cambridge this number is far higher; around 29 per cent of all journeys to work are made by bike. When I recently visited Outspoken Bikes in Cambridge, I saw that more and more local deliveries are being made by bike – they even let me ride one! Although there is always more to do, Cambridge is a cycling success story, but to lift cycling in other areas, and support it still further in areas doing well like Cambridge, we need to see this government do much more. Just a few years ago, buoyed by the fantastic British cycling achievements in the 2012 Olympics, the Prime Minister promised a cycling revolution. But, as has happened all too often, he has failed to deliver on that promise. He has back-pedalled. There has been no revolution. And there is a real gap between the government’s rhetoric and the reality for cyclists.

Powerful campaigning by groups like the Cambridge and London Cycling Campaigns forced the government to concede a Cycling and Walking Investment Strategy. But that strategy is making its way to publication not at a cycling pace, not at a walking pace, but at a snail’s pace. How will it be funded? Cycling has been allotted £300 million in funding until 2020/21. Now it happens that you can repeatedly run into a brick wall when attempting to calculate exactly how much is being spent on cycling. In fact, in answer to a written question I tabled about funding levels outside London and the Cycle Cities in November, the government answered, ‘It is not possible to predict the geographical distribution of other funding for cycling at this stage’.

So the Department for Transport is unable to predict the outcomes of its own spending commitments. Indeed, funding has been disconnected, split between various initiatives, bundled into grants, not ring-fenced, and data on local authority spending are no longer centrally collated. But what we do know is that the £300 million that has been promised for cycling over this Parliament includes £114 million for the Cycle City Ambition Grants and some £50 million for Bikeability training. What funding, if any, will be left over to fund the investment part of the Cycling and Walking Investment Strategy?

We also know that annual support for cycling will fall drastically from a planned £142 million in 2015/16 to somewhere between £50 million and £60 million next year – a cut of well over 50 per cent. I asked the government if they plan for the £300 million allocated for cycling in the Spending Review to be the sole source of funding for the Cycling and Walking Investment Strategy; and how much of that allocation they plan to spend on cycling – they don’t know, or won’t say. There is a real danger that the government is drawing up an investment strategy with no investment.

And this matters – because this strategy, by improving infrastructure, is key to boosting levels of cycling safety. The government promised in its manifesto to ‘reduce the number of cyclists and other road users killed or injured on our roads every year’, but it has failed to set national road safety targets, claiming that it is a matter for local authorities, and absolving itself of responsibility.

Cycling safety is a key factor in encouraging people to get on their bikes in the first place. Anxiety and fear about safety stops many people cycling – especially women and older people. In London, three-quarters of those aged 65 years and over can ride a bicycle, yet only 6 per cent ever do. Two-thirds of non-cyclists and half of all cyclists say that it is too dangerous for them to cycle on the road. We must put in place the measures to make cycling a safe, accessible mode of transport for all – whatever a person’s age or gender.

The argument for investing in cycling is strong and I find it very encouraging that cycling is firmly on the political agenda. But the enthusiasm behind getting people cycling will be squandered if words are not matched by deeds. The government still has time – having already dragged its heels – to reflect on the Cycling and Walking Investment Strategy before it is laid out. I hope they will recognise the arguments being made by campaigners and cyclists and ensure the strategy is properly funded. Only then will we see the benefits of a cycling revolution across the entire country.