A recent survey undertaken by Travel for Cambridgeshire shows commuters are starting to shift from four wheels to two.

Travel for Cambridgeshire is a not-for-profit partnership hosted by Cambridgeshire County Council, one of its ten partners. It aims to ensure that as many journeys as possible to and for work are made using sustainable travel modes – whether car-sharing, public transport, cycling and walking. It works with employers to help deliver and promote sustainable and healthy travel by employees.

Each year, starting in 1999, the organisation has run a survey of its members to track how their staff travel to work. The data from 21 companies who participated in both the 2011 and 2015 surveys have shown significantly positive trends toward more sustainable transport. The percentage of staff driving alone to work has fallen by nearly 3%, whilst the average percentage of those cycling the commute increased by 3% and train usage saw a rise of 1%. Car-sharing proved to be less popular however, dropping by almost one percentage point. 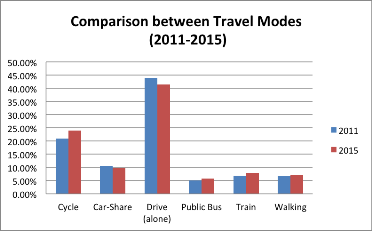 The figures represent the longest stretch of the journey so do not take into account those who cycle or walk into the city having driven the majority of the way beforehand, or those who walk or cycle to catch a train. The results were gathered from over 11,600 responses from 74 employers over the course of two weeks in October 2015. October was chosen as the date to be monitored back in 1999, and has remained a constant for the survey to ensure that it tracked concerted travel habits and avoided false positives from fair-weather cyclists.

The period between 2011 and 2015 is relevant as over the last three years there has been a significant increase in the amount of support available to employees, as Cambridgeshire County Council has taken part in a central government-funded project called the Local Sustainable Transport Fund. This has funded over 30 events including the Cycle Challenge (526 participants cycling over 77,000 miles) and eight Dr Bike workshops.

In term of cycling infrastructure, the project will have delivered over 100 bike parking places, two bike maintenance stands and showers.

If you want to know more or wish to find out how your company/employer can promote sustainable transport, please contact Travel for Cambridgeshire on 01223 715550 or email at info@tfw.org.uk