At the March monthly meeting we presented our new concept for Campaign branding. Following positive reactions to our ideas, the committee agreed to proceed with refining the concept with member feedback and moving to implementation. We plan to launch the new-look branding at our Reach Ride event on 2 May.

Why do we need to change the branding?

Our previous branding has served us well for the last 20 years, but as our Campaign grows and changes so too must the way we present ourselves to our members, the public and the widening range of stakeholders we engage with. The Campaign has a strong reputation; however, a branding refresh was agreed to be strategically important to make the Campaign more accessible, boosting our membership and our diversity and helping to open doors to those we wish to influence. We also wanted our brand to help us represent Cambridge as the Cycling Capital of the UK to aid us in influencing national policy and promoting our city.

There are a few problems with our current brand that we know we need to overcome. Our logo is confusing, reading at first glance as ‘ambridge ycling ampaign’. The cycle used in the logo is static, difficult to use in different contexts (such as social media) and is not representative of the diversity of cycles to be found in Cambridge. The dated appearance of our website is completely at odds with the fact that we are a very current and relevant part of Cambridge culture.

Our approach to rebranding

To undertake the rebranding project, the committee formed a subgroup consisting of Robin Heydon, Roxanne De Beaux, Al Storer, Hester Wells and myself. The group assessed a number of potential branding consultants before choosing to commission Tim Harding (www.thisisharding.com). We were impressed with Tim’s understanding of what a branding refresh would mean for the Campaign. This wasn’t just about a new logo that we could stick on things but rather about a concept for how we communicate who we are and what we do. Tim has international experience and is a Cambridge resident who regularly cycles, often with his young son in the kiddie seat.

Tim drew up a range of initial suggestions with logos based on wheels, sprockets and chain-links up to whole bikes and even cycle routes to get a feel for the direction the subgroup wanted to take the brand. We decided against having a bike or component as part of the logo, since no single bike could represent everyone in the Campaign. We also felt that it was good to move away from an overly literal thing-as-logo interpretation of branding that’s so prevalent in cycle advocacy, yet nowhere else.

The top three ideas were selected for Tim to develop into fuller concepts. The selected logos were then worked into a full branding, including mock-ups for the website, Twitter and print media. At this point the subgroup selected a single concept to work up into a full brand specification.

And the new brand image is… 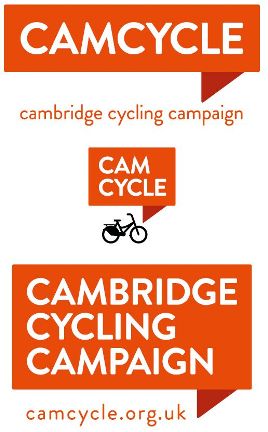 The chosen concept is a speech bubble to represent that the Campaign speaks for cycling in Cambridge. It is a distinctive shape that is readily recognisable, including in silhouette for monochrome print media, but it is also flexible as the proportions can be changed to suit the context. We’ve chosen to use ‘Dutch Orange’ as the primary colour in recognition of the Campaign’s aspirations for Dutch-quality infrastructure, with ‘Aggregate Red’ representing what we’ve achieved with the latest cycle lanes. The speech bubble is to be coupled with other items depending on the context; the web address, a Campaign quote, or a ‘hero cycle’.

As we know, a ‘hero cycle’ means something different to each individual. For this reason, we plan to capture the real diversity of Cambridge’s cyclists by rotating through ‘hero cycles’: a town bike, a racer, a kid’s bike, a fixie, a folding bike, a tandem and more. We want you to tell us what hero cycles you think we should use.

In its essence, the brand is about strong imagery that evokes the incredibly diverse cycling culture in Cambridge. The bubble is more a flexible motif than prescriptive logo. It can be wide for a letterhead, web banner or compressed for a social media icon. It would be placed over beautiful photos of members’ own cycles to illustrate blog posts, or alongside inspiring Cambridge locations in newsletter articles. We hope designers and artists can take the concept and create playful new uses of the brand. 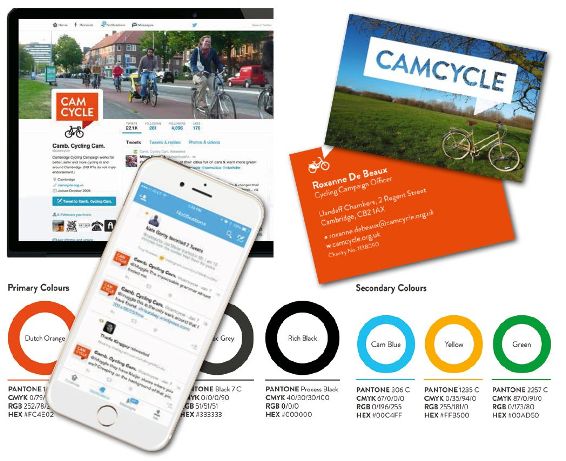 The concept had a positive response from members at the March open meeting. There was constructive criticism too, which will be taken on board as we make refinements and finalise the brand. In particular, there remains discussion over the name: while remaining the Cambridge Cycling Campaign where an official hardline approach is needed, a shorter form CamCycle (or similar) better meets the branding goals, avoids ongoing confusion with other CCC-abbreviated organisations, and is already familiar to many from the web address and twitter handle. We’d be keen to hear your thoughts on this, or any other aspect of the rebranding, via the contact email or on Cyclescape (www.camcycle.cyclescape.org/threads/2470).

We hope to have the brand complete ready for a big launch event at the Reach Ride (page 24). After that you should start to see the new look appear; initially we’ll be updating the web and social media sites, then refreshing the stall bike and redesigning the newsletter.

We will be looking to our members and Cambridge cyclists to help us create the imagery that represents what cycling in Cambridge is all about. We will be sourcing photos, artwork and illustrations that will be used across a variety of online and print platforms. Please get in touch if you would like to be involved.