Cambridge has only four stretches of road commonly called bus lanes. In fact, they are all bus and cycle lanes. They are

Although these facilities are limited, and shared with buses, they do at least keep us clear of most motor vehicles (not that there would be many cycles in the Huntingdon Road lane). However, this space is now threatened with more vehicles. 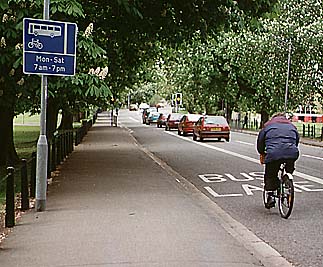 The City Council has recently published a traffic regulation order that would allow taxis to use these lanes. This is already allowed in Milton Road. Originally, the Council advertised to allow all hire cars, but this was apparently a mistake and they only intended to allow ‘Hackney Carriages’, the hundred and some taxis that are allowed to ply for hire.

We thought this was not on. To the cyclist without a car, taxis are certainly extremely useful, and we have supported taxi access to places where private cars are not allowed. However, many of us feel that many taxis are driven fast and in an intimidating way. Also, allowing cars of any kind into bus and cycle lanes undermines their effectiveness – other motorists are likely to think that they can break the rules. Therefore we resolved at the April campaign meeting to object to the proposal, and a bit of deft campaigning on the stall and by e-mail we think led to about sixty objections being lodged with the Council. A committee will make a decision on this in the not too distant future.

A further threat to bus and cycle lanes is coming from the motorcycle lobby. They even want motorbikes to be able to use cycle lanes, which is truly frightening. In the meantime, they are focusing their attention on bus and cycle lanes. In Bristol, a bus lane has already been opened up to motorcycles, and there it is reported that around a third of the cyclists using it have felt threatened. The decision here was taken by councillors against the Council officer’s recommendation. Other cities are experimenting.

I thought, with the level of cycling in Cambridge and the relatively few bus and cycle lanes, that the City might have been immune to this. But no! A representative of the motorcycle lobby approached me after the Grand Cycle Ride in May to sound me out about allowing motorbikes into Cambridge bus lanes.

It is true that motorcyclists, as well as cyclists, have safety problems. Measured per kilometre travelled, motorcyclists have the worst safety record of any road user. The speed differential between cyclists and motorcyclists is large, and motorcycles are heavy machines. Motorcycles also pollute – not as much as private cars, but still significantly. (Taxis are generally considered to pollute twice as much as private cars because they do double the equivalent journey.)

Would mopeds alone – much slower and lighter – be the thin end of a bigger wedge? Could these moves end up with bus lanes being converted to ‘everything but the private car’ lanes as all road users put forward a case for their own road space?