This article below is a archived feature about the old Trishaws that are no longer running.

Please note that we (Cambridge Cycling Campaign) do not offer rickshaw hire. However, we maintain a webpage about rickshaw/trishaw companies in Cambridge.

The beginning of April saw the welcome introduction of a new kind of vehicle to Cambridge’s streets: the trishaw, a pedal powered alternative to motorised public transport. I spoke to Simon Lane who is responsible for setting up and running Cambridge Trishaws.

Simon first saw tricycle rickshaws when he was travelling around Asia in the 1980s, and thought they were a good idea. They are a non-polluting mode of transport and provide much needed employment in Third World countries. However, he was dismayed that governments viewed them as a backward form of transport, and he used trishaws as much as possible in order to support them. In America he met someone who was setting up a trishaw service in San Francisco and decided to go and ride one there. After riding a trishaw for a while in San Francisco, Simon bought his own, which led to his starting the trishaw service in Cambridge. Cambridge Trishaws has six trishaws during the initial experimental period, and there are plans to expand to 12 next year.

The trishaws have been a feature of the local press recently, including pictures of them being used for a wedding and by the outgoing mayor. As well as tours around town, the trishaws are available for private hire: anyone can phone up and book one. Possible uses include trips to and from pubs, weddings, taking elderly visitors to the town centre, or just for fun. The trishaws generally run until 8.00 p.m. (or possibly a bit later in summer) but may be available later if booked ahead.

The regular tours cover the town centre, including the Backs and the Grafton Centre. With an open top and moving at a slow pace, the trishaws are ideal for seeing the sights of the City. Each trishaw can carry two passengers side by side, and prices for the tours start from three pounds. If you just want to try a short ride, Simon is prepared to negotiate. The trishaws have a hood to keep the passengers dry, so business does not suffer when it rains. If you forget your umbrella, use a trishaw! About 60% of the customers so far have been locals trying the trishaws out.

Simon is interested in changing people’s ideas about transport. Pollution from motor vehicles is an increasing problem: Cambridge’s historic buildings are corroded by it, and more children are suffering from asthma every year. Simon’s aim is to provide an alternative. Savings on fuel and maintenance can be used to employ more people, and as the trishaws move slowly, more are required, creating more jobs. It’s a question of changing people’s perceptions of transport, so that they realise these are good ideas.

There are many vehicles inappropriately carrying small loads around town. One possible idea for the future is cargo carrying, possibly using the British designed Brox. The Brox is a four wheeled pedal powered vehicle designed to carry cargo. Trishaws are more suitable for passengers than Broxes, as they are higher and so are better for sightseeing, but not so good for heavy loads.

The trishaws are built in the States and were designed by Jim Tipke, an American designer who also used to design Indianapolis 500 racing cars. The trishaws have hydraulic brakes (disc brakes on each rear wheel and a hub brake on the front), and the back wheels have a differential which allows a trishaw to turn in a very small space – one wheel turns one way, the other the opposite way! This makes the trishaws very manoeuvrable, so that they can pull over often to allow other vehicles to pass, so no one is held up and drivers don’t get bad-tempered. 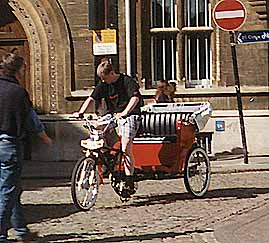 The body in which the passengers sit is suspended from the frame, and the front forks also have suspension. The trishaws have six gears, plenty for around Cambridge. They use a derailleur similar to an ordinary bicycle, except there is an extra step of gearing (a second chain, between the block halfway down the trishaw, and the differential on the rear axle), which reduces the gearing by roughly half, making it easier to carry passengers. In San Francisco, even lower gearing was needed to get up the steep hills, and to carry an extra passenger, since there the trishaws are licensed to carry three. The trishaws have indicators and a brake light, as well as lights for night-time riding. Simon has added solar panels to trickle charge the battery during the day, so that he does not need any other electricity supply.

When not riding his trishaw around town, Simon is busy doing the other tasks needed for a successful business, such as publicity and accounts. Talking to Simon, I very much got the impression that, whilst he is making a living, he was running the trishaws mainly as a way of changing people’s perceptions of transport, not to make lots of money. He says it’s an exciting time to be doing this: with the millennium approaching, people are looking at new ways of doing all kinds of things.