Late in April I had the opportunity of trying out the ‘Sea to Sea’ cycle route. Known as the C2C, this is a 140 mile trip from the Lake District to the East Coast, billed as being ‘on minor roads and special traffic-free trails’. It’s part of Sustrans‘ rapidly growing National Cycle Network.

Armed with a C2C map, and a C2C bed-and-breakfast guide, from Sustrans, Jo, John and I read that the route ‘should be ridden from west to east, giving the benefit of the prevailing westerly wind – the hills are like waves with steep western faces and long sloping backs giving encouragingly long downhills’. With hindsight, I would add that the Sustrans recommendation should be followed because all the signposts and maps assume you’re going west to east.

Starting in the west means choosing to start from Whitehaven or Workington, and to finish at Sunderland or Newcastle. We plumped for Whitehaven, as it’s said to be the more scenic route, although the Workington route does by-pass the big climb up to Whinlatter Pass. We decided to go at a leisurely 20 miles a day, and make the most of the attractions along the way.

We chose to stay in Bed and Breakfasts, although there are plenty of other types of accommodation, from camping to hotels. The C2C B&B guide (especially the coloured-covered 1997 edition) is packed with useful information, hints and tips, including suggestions for a packing list – which I found invaluable.

We chose to go by train. The co-ordination of tickets and reservations for two bikes from Bury St Edmunds, and one from Cambridge, was time-consuming: between us, we must have spent nearly an hour at Cambridge station, just making the reservations, but the train route worked well. I left Cambridge just before 8 a.m., and we arrived in Whitehaven around 3:30 p.m.

After stocking up on bananas and Mars bars in Whitehaven, we finally set off. A local cyclist led us to the start of the ‘Whitehaven to Ennerdale’ cycle path – a beautifully surfaced route along the line of an old mineral railway. My initial outrage at finding a car driving along the first 20 metres of Sustrans route was tempered when we were assured that the rugby club only used it car park access on Saturday afternoons! 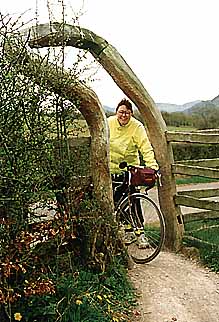 This path has very stylish seats, sculptures and signposts, and is a gently undulating start to the C2C. Some bits seemed hilly to a veteran of ten years cycling in Cambridge, but by the end of the trip I would regard them as small bumps. We stopped at the Spar in Cleator Moor, to get the very first stamp on our map, in anticipation of a complete set – and a Sustrans T-shirt.

By five miles into this day’s journey, John’s knees were quite painful, so, after much prevaricating on my part, we agreed to part ways. Jo and John would make their way to Keswick, and I would try to complete the route on my own, confident that I would meet other cyclists along the way. (10 000 did it last year – so I was bound to see some others, right?)

The C2C map shows the big climbs on each section. The very first one listed is ‘Whinlatter Pass – 125 metres in 1.25 miles’. I’d heard so many people mention this mammoth climb that, by the time I arrived, I was seriously worried. This proved to be a good thing – my fears were bigger than the hill, and by just plodding along in first gear, and stopping for several rests, I managed to cycle to the top. And it was worth it – for the café at the top which did superb vegetarian food, and for the glorious winding descent through the forest on the other side.

Before setting off on the route, I paid a visit to Friars Crag, for a view of Derwent Water. It was gloriously peaceful, early in the morning, and I just stood there for fifteen minutes, savouring the view, and the fresh air.

Just outside Keswick, the route leaves the railway line, climbing up a horrendous, steep, slippery slope to the A66, before dropping down again.

Sustrans are apparently negotiating to remove this nasty detour. In the meantime, however, I struggled to even push my bike here. If you can’t support the weight of your bike and luggage, I recommend you look very closely at your map for an alternative route outside Keswick.

After a glorious morning, riding the beautiful countryside, as I approached Penrith, I took a touristy detour to a historic house called ‘Dalemain’. I was made extremely welcome, and spent several hours wandering around. I gave the gardens a miss because of wet weather, but was assured that they were worth a visit.

I decided that, instead of stopping at every tea place along the way, I’d try to press on to Alston early enough to enjoy the market town, cobbled streets and the general 1960s atmosphere for which it is famed.

Great plan, and by 11 o’clock I’d reached Little Salkeld, at the bottom of a seriously steep hill, with a water mill and a sign saying it mills organic flour. I just couldn’t pass that by! Two hours later, I was full of home-made soup, home-made bread and home-made cake, and I’d enjoyed a fascinating guided tour of the mill.

One of the biggest climbs of the whole route is the 580 metre rise, over 3 miles, to Hartside. Most of the approach to this is off-road, and extremely bumpy and rocky. I walked parts of it, just because I was worried about breaking a spoke. When the off-road section crossed the A686, I rejoined the main road for the last half mile or so. The descent from Hartside was the best of the trip. Long, sweeping bends, great views, no potholes, no gravel, no sharp turns – and only one idiot Volvo driver who thought I should be riding six inches from the verge. 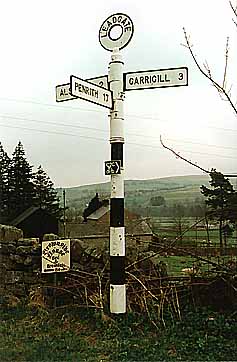 I arrived in Alston around 4 p.m., looking forward to seeing at least some of the shops – only to find it was early closing. I’d forgotten such a custom existed!

I was feeling pretty tired, but determined to continue. Each small hill was a challenge, and I was getting slower and slower. After only five miles, the climb over Downgang Hush and into Nenthead had me absolutely exhausted. As I came into Nenthead, however, I happened across only the third and fourth cyclists I’d met since bidding farewell to Jo and John. Muriel and Cynthia, who was on her 3-speed retirement present, had started two days after me, and were going great guns. We chatted for a while, then set off together, immediately joining the climb to the highest point on the route. I realised very soon that I’d been riding too quickly. By just cycling a little more slowly, and stopping to admire the views (especially the uphill ones), we made great progress without really getting tired at all. Of course, I’m sure the company helped, by taking my mind off the climbs. Before I knew it, we’d arrived at Allenheads, where I’d been planning to spend that evening, and it wasn’t even 2 p.m. We stopped to eat at the Heritage Centre. This is another eatery which gets the ‘Clare Macrae seal of approval’, for good value, tasty vegetarian food.

Out of Allenheads, we passed many old mine workings, and a somewhat bleaker landscape, before joining the Waskerley Way, and arriving in Consett late in the afternoon. We didn’t find anywhere to stay in Consett, Annfield Plain, or Stanley. By 8 p.m. in Stanley I was starting to get concerned, but a kind publican in Stanley phoned the ‘Beamish Mary Inn’ in Co-operative Villas and found us superb accommodation for the night.

After breakfast, I bade a fond farewell to Muriel and Cynthia, and headed for the Beamish Museum, packed with industrial heritage, including houses, shops, and a school and chapel, all moved here brick by brick, to preserve them. I spent a fascinating few hours, before heading off to Sunderland mid-afternoon. 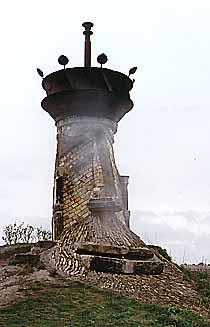 The ride along the ‘Consett and Sunderland Railway Path’ was a breeze: all down hill, and on beautifully wide, well surfaced paths. Tandem riders, however, should find out what sort of anti-motor-bike barriers are in use before attempting this stretch. I think you’d be lifting your bike a lot. All went well until I reached Sunderland. About two miles from the coast, and the all-important last T-shirt stamp, the signs just disappeared. All attempts at retracing my steps failed, and I got more and more frustrated. In the end, I just followed the road signs (and A roads) to the Seaburn Centre, which the map told me was where I could get my final.

When I eventually arrived, I found a sign in the window saying ‘we don’t do C2C stamps any more’. My thoughts at that moment were completely unprintable. There were no directions to the new stamping point – just a place-name. Thankfully, two local cyclists (Tony, and ‘Kev the Celeb’) led me to the Sunderland Marina, which has a superb ‘welcome’ sign. Only assistance from Tony and Kev prevented my final memories of the ride from being completely spoilt. I’ve written to Sustrans suggesting that they put signs in the windows of the other stamping locations, warning of the changed location, since it transpires that you cycle close to the Marina on the way to the Seaburn Centre.

I decided to head straight home, so spent Friday morning following an OS map, to find my way to Newcastle station.

This was actually an interesting contrast to the Sustrans routes. I had to rediscover my initiative to choose a reasonable route, and I enjoyed the challenge of avoiding major roads, in contrast to the physical challenge on the C2C of making it over the hills.

I enjoyed the trip immensely, for the spectacular scenery, and the great feeling of freedom, that I was travelling completely under my own steam. The road-based sections were surprisingly free of traffic, potholes and grit, making them very pleasant to cycle along. I was a little disappointed with the surface-quality of some of the off-road sections. I’m not sure whether they’ll be improved in the future, or whether they’re consistent with Sustrans specifications. On the other hand, I was completely struck by the genuine welcome, and great helpfulness, of people living along the route.

I have since sent my completed map and cheque off to Sustrans, and received a wonderful T-shirt with a sheep on a bicycle – very fitting, since I think I saw more sheep that week than in the rest of my life put together.

Although the route is still in an ‘interim’ state, meaning that more work needs to be done, I thoroughly commend it to anyone who’d like a cycling holiday, with the reassurance of knowing that they’ll be on a well planned, well maintained route.