The County Council’s transport team is busy at the moment putting together the bid to the Department of Transport for this year’s Transport Policies and Programmes, including the Cambridge Package Bid (see What is a Package).

Making junctions safer is one feature of the package – for example at the Trumpington Road / Lensfield Road junction in this year’s spending. Cycleways are another – Barton Road is being partly funded in this way for this year.

However, at the Cycling Liaison Committee meeting before last we were shown a plan, almost in passing, of inter-village links – like the one newly constructed between Comberton and Toft. It started to become apparent that this map could become the basis for the cycling proposals for the package bid for 1998-99 – with nothing significant in Cambridge – unless we did something about it. It also implied a continuing predominance of shared-use footways (though some of them would be better termed cycle tracks in rural areas).

Therefore, for the last Liaison Group meeting we wrote two documents. Firstly a letter expressing concern at the lack of Cambridge emphasis, and also the lack of the strategic planning that the Liaison Group was supposed to be doing. Secondly, a long document, in draft at this stage, giving a list of lots of measures that we would like to see developed in the bid, other than just rural cycleways.

We would like some rapid feedback from you, to turn this report into final form. It is too long to reproduce completely here, so I will summarise it. Those of you who have Internet access will already have heard about this and know how to read the report, as will everyone who attended the May general meeting. If you would like a full paper copy, please phone 690718.

What is a package?

Each July, Cambridgeshire County Council, like other English highway authorities, sends its TPP (Transport Policies and Programmes) document to the Government Office for the Eastern Region (GOER). There it is reviewed – scored against current central government policies – and sent on to the Department of Transport who allocate capital grants. The TPP is a bid for funds for transport capital spending in the coming financial year.

The DoT likes to be given a package of measures, typically a collection of small and medium schemes for a town or city, rather than independent bids for separate schemes. A successful package is consistent with local plans, meets approval from other local authorities such as the City Council, and fits the guidelines – which include cycling items – published by the DoT in April. If it’s accepted, central government typically provides about 50% of the money the County asks for. It is then up to the County to decide which parts of the package to carry out. The Cambridge Package has raised £1.5 million in each of the last two years, and is one of the most successful in the country.

The report follows the hierarchical approach adopted by our Manifesto for Cycling Provision and also by the recent cycle planning bible, Cycle Friendly Infrastructure. We said: Cyclists’ main problems are caused by volume of traffic, traffic speed, intimidating barriers (such as the A14) and a legacy of poor quality provision. Therefore the objectives should be to reduce the volume of traffic, reduce the speed of traffic, remove the barriers and improve existing infrastructure.

Therefore we didn’t call for cycleways, but first of all put the emphasis on speed reduction: speed cameras, speed limits, and cycle-friendly traffic calming. The picture below shows one example of this.

Norwich’s King Street shows how it is possible to have an effective speed hump but still allow cyclists through easily.

Then we asked for junction improvements and other accessibility improvements so that the really big roundabouts and gyratories like Mitcham’s Corner are tamed. The ring road from Newmarket Road right round to Addenbrooke’s has only one cycle crossing in its 4 or so kilometres, and nearly all the junctions are medium or large roundabouts. The more confident among you don’t like traffic lights because they slow you down, but it is nevertheless well demonstrated that such roundabouts are among the most dangerous junctions for cyclists, and highly intimidating for most cyclists. 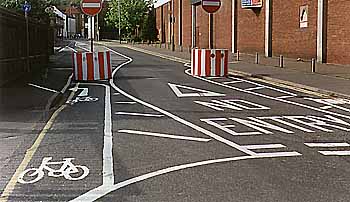 King Street in Norwich demonstrates at the same time how to do road closures and not to do it: the gap on the right is fine, but on the left the enormous island forces you onto the pavement. 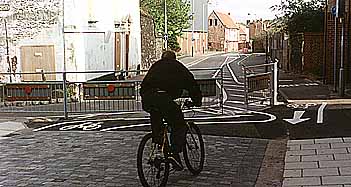 We also asked for more closures of roads to private car traffic, extending the Bridge Street experiment. Pelican crossings are often badly timed for cyclists and pedestrians, so we talked about changes to give non-motorised road users higher priority at such signals.

Cycle Parking already figured in the draft Package Bid, but we ask to extend what was there into areas outside the City Centre.

Because South Cambridgeshire has so much money in next year’s budget, we asked for a Safe Routes to School project. This means a school-centred approach to safety, addressing the problems caused by car movements around a school, speed limits, and crossings based on surveys of travel patterns, as well as cycle facilities, which much more often means shared-use here. This seemed to be a more focused use of the funds than simply paths between villages, which stop at the edge of each village just where the traffic concentrates.

There are always a lot of niggles about cycling infrastructure, because success is in the details. Therefore we asked for a budget to address low cost minor works. We would particularly like to hear from you about your pet irritations that might be fixed easily.

Sustrans routes need some funding, as do other routes away from roads (for example, Jim Chisholm is suggesting a route alongside the railway through the City).

There is far more in our list of suggestions than could ever be done in one year. But the Package system is a rolling programme, and I was keen to show that building shared-use footways is not the only – indeed not the primary – way of providing for cyclists.

The next step is to condense the essence of the report into a short letter that can support a package bid. The Council is actively seeking our support. The aims of the package are admirable, so it would be a shame if the schemes proposed did not live up to those aims.