At the end of a trekking holiday to Nepal I rented a mountain bike for four days to ‘do’ the city of Kathmandu. I’d just come down from a trip to Everest Base Camp and so I thought the capital’s ring road would be a suitable new challenge.

There are no facilities in Nepal’s capital to encourage cycling. No cycle lanes, no advance stop lines, no cycle tracks and no cycle parking. Most of the bikes have no gears and are of the steel roadster type – sometimes with doubled top tubes to strengthen the bike for load-carrying. Indeed, that is what bikes are mostly used for in this city. I saw bikes carrying heavy gas bottles or so loaded with bags of rice that they could only be pushed along. I saw relatively few cycles being ridden just for transport.

The ring road is roughly 15 miles around. It is mostly just a wide blacktop road, about the width of three or four traffic lanes, but road markings are very rare. On either side of that there is usually a wide dusty strip where people walk and dogs enjoy a deep sleep, and which can be ridden on when it is occasionally necessary to undertake a bus. Work was under way at the time to dual the ring road, which would mean it would then include a central reservation. This will result in faster traffic and make it even more difficult to cross on foot.

I didn’t expect that riding on this road was going to be much fun, and I had to talk myself up to doing it. My trekking guide advised me to be particularly wary of the local buses which he described as being driven by ‘boys’! I felt that once I’d done it I would have the measure of the scale of the city and a sense of the size of the valley that the city is rapidly expanding to fill. The ride took about four hours, which included the time to stop and take hundreds of photos, have lunch and make a couple of small excursions off the road. Acclimatisation to high altitude helped me to survive the sometimes oxygen-starved air of the road. 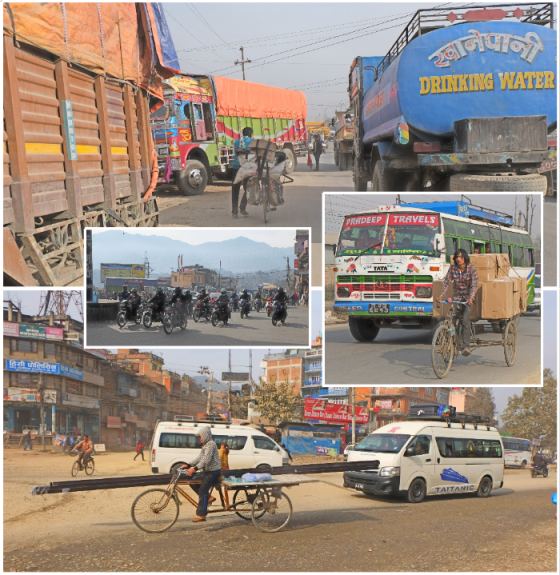 The traffic on the ring road consists of large vehicles in the form of buses and big trucks. They are far outnumbered by motorcycles, but at the slow speed on this road they seem to be more akin to the cyclist and so less of a threat. I saw no articulated lorries, nor any vehicles pulling trailers – I don’t think they would survive on the rough country roads. The buses come in three main varieties. There are three-wheeled tuk-tuks which plod along very slowly and stop very frequently while people climb in and out of the back. These go so slowly and are so small that they are barely noticeable. Next, big local buses which seem to be constantly scouting for passengers whether there is a bus stop or not. These are the buses that I constantly had to re-overtake as they passed me then pulled sharply over in the hope of potential new clients. Had I not been focussed on taking so many photos I could have easily out-run these buses. Lastly, there are longer-distance buses which stop less often.

The other traffic is made up of taxis (mostly small white Suzuki cars), 4x4s, vans of various sorts, crowds of motorbikes and the occasional cow. Car ownership, at 5 per thousand households, is one hundredth of the UK figure.

There’s not much expectation that drivers will check their mirrors or that motorbike riders will look behind, so drivers are encouraged to toot frequently so that other road users are alerted to their presence. The toots are short bursts that sound like ‘I’m here’ or ‘I’m coming through’ rather than the longer, but far less common, blasts that sound like ‘Get out of the way!’ that I’m used to on the streets of Cambridge. Indeed this rather oppressive constant mild tooting is essentially the sound of the streets. It creates an atmosphere of the slow struggling progress of the nation. The pollution and dust add to the picture of dry, suffocating labour.

‘Kings of the Road’, as their colourful paintwork suggests, are the big trucks, and they have the loudest and most musical toots. A short blast from them, which sounds like a loud double quack, and you know that a big truck is behind you, or coming around the next corner, and they’re the least manoeuvrable so you had better look out to see what they’re doing.

There are virtually no road crossing facilities. In many places the ring road has cut straight across a local route. Pedestrians gather en masse at the side of the road and face the oncoming traffic. They pick their moment and walk into the road, keeping their eyes on the oncoming vehicles. Mostly it slows down, or slightly changes course. The next lanes of traffic also slow. Basically, the traffic respects (to a point) the pedestrians and lets them cross. At some point the pedestrian has to turn to face the other way to deal with the traffic on the second half of the road coming from the other direction. It’s a bit of a matter of blind faith that they were already aware of you as you turn to face them.

For me as an observer and tourist crossing the road like this was a bit of fun, but having to do it all the time must add to the drudgery of life there.

There are virtually no road markings and certainly nothing that remotely resembles a cycle lane. So you have a familiar choice – where should you ride on this road? The traffic is not going all that fast, in fact it is only going a bit faster than a normal cycling speed. Maybe in some places it goes about twice as fast as cycling, but mostly it doesn’t feel that it is going very quickly at all. It has to stop fairly often. So you just start cycling, overtaking the buses and then being overtaken. When traffic comes to a halt, my instinct was to stop and wait patiently behind for it to start moving again. But if you do that then very quickly you are joined by a small army of motorcycles on all sides. There’s no time to work out who has right of way, it’s all very macho, and all the motor vehicles push their way into any gap, on both sides. The whole scene comes to a temporary halt, until usually only one vehicle can make a move. It slowly edges forward, other gaps open and the traffic starts to flow again. It’s like that constantly, amid gentle tooting. I don’t think I ever heard a genuinely impatient toot.

Large pipes at the back or side of the vehicles puff out big clouds of very dirty-looking black or grey smoke. This is most noticeable when buses are trying to move off from a standstill. But probably worse is the constant but less visible output from the innumerable motorbikes that buzz incessantly among the traffic. I had to hold my breath at times while passing through these clouds, but most shocking to me was the sense of breathlessness that I had on several occasions when the atmosphere that I’d gulped in seemed to be empty of oxygen. Very unpleasant, and I tried to console myself with the idea that my mucus system was doing its job of filtering the muck. Many people wear thin cloth masks over their faces, but surely these are only of psychological value as they don’t form a tight seal around the nose and the particulates are far smaller than the gaps in the material.

Stirred up with all the poisonous emissions is the dust of Nepal which seems to pervade the whole country. I think it is fine sand or dirt – not so much of a problem on the metalled ring road, but definitely another hazard on the many unsurfaced roads just off it, and you’re best off staying well back from any vehicle that is kicking it up.

I was told that Chinese investment was paying for the dualling of the ring-road, and that Japanese investment had paid for a major highway from the city to the east of Nepal. I wonder who will donate money to pay for any improvements to encourage walking or cycling to save this potentially beautiful city from being further spoiled by more pollution and congestion.