The upgraded roundabout on Perne Road is a flawed scheme that has got a lot of people upset. But why? 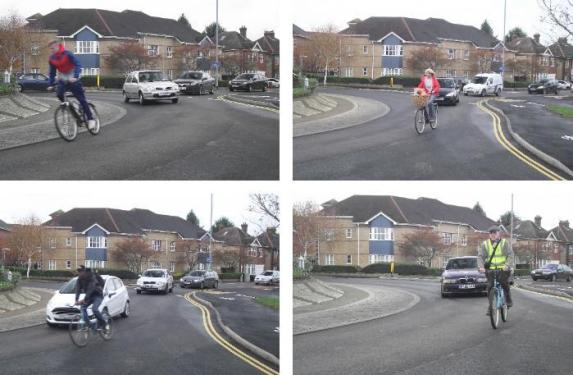 There was much discussion during the planning phase about ‘full Dutch’ roundabouts and whether cyclists using an ‘annular ring’ would have priority over motor vehicles. I’m not convinced that priority is that important, but it was shown that in the footprint of the public highway land at this location there is space for a roundabout that could handle articulated lorries, with a separate one-way cycle ring and a separate footway.

There’s a simple reason we don’t have that today. Money. Making the centre circle smaller would have required much more digging and moving of services. A rough estimate of a ‘full’ scheme is that it would have cost around £1 million, more than double the final budget. The original budget for this scheme was a little over £100k. Perhaps we could have got better funding under the City Deal, though that is not certain.

However, there was also opposition to the idea from the council officer and the contracted designer. The designer did not feel that having separated facilities at the roundabout when there are only on-road lanes on the roads was a good idea. I disagree, and Dutch highway engineers would too – there are many examples of separation appearing just at junctions, especially where minor roads meet major ones. Junctions are the most dangerous places on the roads – with limited resources we should be concentrating on getting them safest first.

That’s what we could have had. But what about what we do have? We’ve had reports in the press already about incidents involving drivers not giving way to children cycling in the roadway. Generally I get the impression that adult cyclists going between Birdwood Road and Radegund Road are happier, finding the lower speeds of motor vehicles helpful, whilst those going along Perne Road (including myself) are encountering more ‘squeezing’ and other hostility.

What about the off-road provision? Leaving the road is easy on most arms. The Give Way lines are rather oddly positioned behind the tactile paving – a clear sign of the compromise. The islands are plenty big enough. On three of the corners, there’s planting in the ‘desire line’ – though this helps keep speeds low which should help reduce conflict. On two of these corners there are driveways accessed across the footway directly from the roundabout. The third corner is more awkward, as the service road for the shops (currently closed) has been retained and there has been parking on the shared-use.

However, on none of the arms is there an indication of where the boundary between legal cycling and illegal cycling is. In discussions with the council officer, he does not see this as a problem. I don’t agree. The level of pavement cycling in the area is such that a crackdown is almost inevitable at some point. It is simply wrong not to mark the boundary clearly.