An excellent programme of adding around 600 new cycle parking spaces around Cambridge city centre was undertaken during the summer, a project led by then Councillor Tim Ward with cross-party backing.

This programme happened after sustained lobbying over many years by Cambridge Cycling Campaign.

The project is visibly clearing pavements that were strewn with bikes to the detriment of walkers and the disabled, by allocating secure spaces instead. It is noticeable that some areas that had bikes half-covering the pavement (even outside university term time) can now be much more freely walked through and are much tidier. 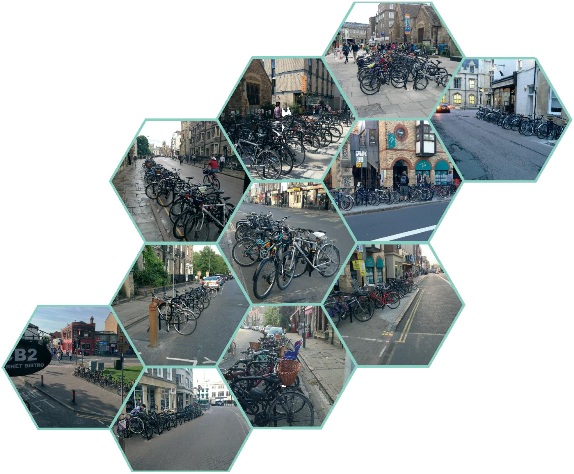 The creation of official cycle parking spaces brings many benefits. As well as providing security, it gives the clear message that cycling is a real mode of transport, to be allocated space and resources accordingly, rather than something merely to be tolerated grudgingly.

New cycle parking is economically beneficial. It means more people can access the city centre. A very small number of pay-and-display parking spaces were removed for this project, despite concerns from some parts of the county council that this would reduce revenue at a time of cutbacks. But this view does not take into account that cycle parking is the best, in fact the only, way nowadays to increase the number of people that can access the city centre, with the economic benefits that brings.

Those ten former pay-and-display spaces, representing probably about 15 or 20 people arriving by car, have been replaced by space for 80 people, with high occupancy rates. In a city with an expanding population due to tens of thousands of houses being built, there is no way that all these new people could access the city centre by car, because there simply isn’t the space. Even public transport is reaching limits because of the lack of space for bus stop bays.

Approval of a small number of the new areas of cycle parking was paused while issues relating to disabled car parking spaces were resolved. We do not support removal of disabled parking that is in active use, and so had no problems with this delay to ensure this issue could be resolved satisfactorily.

Cambridge Cycling Campaign would like to see this successful programme continued with additional spaces, where possible locations come to light. We were a little disappointed that King’s Parade, and the area outside Trinity Hall, for instance, were not included. Hopefully the success of the current new spaces will spur on efforts for new spaces.

Likewise, cycle parking on the corner of Parker’s Piece near Pizza Hut is still in very short supply, despite highly obstructive car parking remaining on Regent Terrace, and despite this being a very heavily-used walking and cycle route. We did not consent to the original plans to take away parts of the grass for cycle parking, arguing that car parking should instead be removed. The latter has not happened because officers argued that turning space is required, but further along would be possible (and indeed is where cars are often parked).

In some cases, the design of the cycle parking racks is a little perplexing. In some places, high-capacity racks have been used but at normal spacing. Our continued policy view is that high-capacity racks should only ever be used instead of normal Sheffield stands in exceptional circumstances. This is because Sheffield stands provide the greatest ease of access and accessibility to all. For instance, people with larger baskets have problems with high-capacity stands. Also, they can be accessed from both sides, which for instance avoids the problem outside Sainsbury’s where accessing the cycle parking means intruding into a busy pedestrian thoroughfare.

These points aside, the programme is a great success and we think the city council and the individuals who pushed it through and worked on it are due strong congratulations.