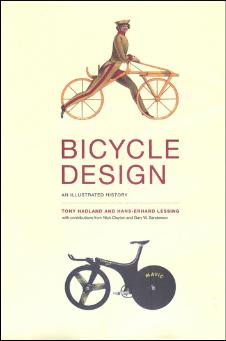 Extensively illustrated, largely from patent applications and advertising literature, this book traces the technological history of the bike with chapters on the Velocipede, the Safety Bicycle, the Racing Bicycle, Military Bicycles, Mountain Bikes and Recumbents. Dispersed amongst these chapters are ones dealing with such inventions and refinements as front drive, wire wheels, indirect drive, suspension, transmission, braking, saddles, pedals, handlebars, lighting, and luggage, all of which drove the increasing sophistication of this brilliant extension of the power of the human body.

The whole story is one of evolution, from the first direct ancestor of the bicycle, the draisine (see upper cover illustration above) around 1817, to the crank-operated machines called in England velocipedes, to the Penny Farthings and at last the Safety Bicycle which is much what we have today.

What is odd is that the bicycle’s evolutionary history has a villain, a villain that stifles further evolution. And that is the UCI, the Union Cycliste Internationale,the governing body of cycle racing. The UCI forbids racing with small-wheeled bikes, aerodynamic aids such as fairings, and recumbents. To quote the authors of Bicycle Design: ‘There is…a strong case to be made that the UCI has been a major impediment to the development of human-powered transport and the bicycle in particular.’

The Tour de France passing through Cambridge this July would be a lot faster and more exciting had the UCI not banned recumbents since 1934.