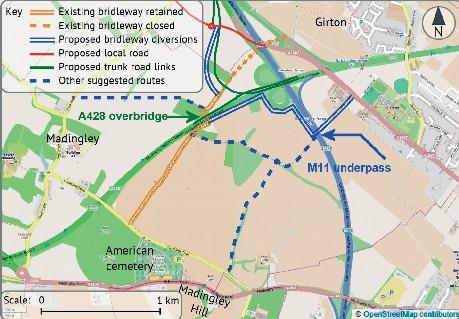 I don’t think whole ships and their crews have been lost north-west of Cambridge, but some of my ideas in Newsletter 81 seem to have floundered for a number of years. Now both the article in Newsletter 114by Louise Byam-Cook, and the rapid consultations about the A14 upgrade, as well as real progress on the University’s North-West Cambridge site, have caused me to revisit the area, even though it is in on the opposite side of Cambridge to my usual routes.

Unfortunately, previous efforts to create good-quality routes for Non-Motorised Users (NMUs) have been prevented by the attitude of local land-owners, despite sources of funding being clear. Much more recently Robin Heydon, and others, as the A14 NMU coalition, have worked well with the Highways Agency and their consultants, and with this there should now be other good opportunities for linked improvements to a high standard.

One of the issues with some currently suggested proposals from Madingley and Dry Drayton is that it is difficult to produce a route suitable for ‘an intelligent unaccompanied 12 year-old’, which is the accepted standard for good-quality cycle routes. The proposed provision is not unbroken and it requires the use of the junction at the foot of Madingley Hill, which is a known black spot for crashes. Just to modify that junction to make provision for safe cycling would be hugely expensive.

So what major changes have there been recently?

The Highways Agency is proposing to divert a bridleway away from the Girton Interchange and route it south of the junction to the accommodation underpass beneath the M11 and back to Huntingdon Road. They have the power to do this.

The recent ‘Transport Strategy for Cambridge and South Cambridgeshire’ has suggested similar upgrades for cycling and walking routes.

What has not changed is the existence of the A428 overbridge and the M11 underpass. Major strategic roads produce huge barriers to NMUs and such ‘accommodation’ structures can safely and cost-effectively break these barriers and create valuable routes for those on foot, on cycles, or on horses. Although both these structures carry public rights of way and are less than one kilometre apart, they are not linked and are very little used. This is not surprising since the footpath leads into a difficult wet area, and the bridleway into the Girton interchange!

The Highways Agency proposals would link these, which would be very welcome, but there is a risk that it would be a low-quality route, wedged against existing highways, with right-angled bends and silly kinks. To make a good utility route, and improve safety for all users, some field corners need to be used, probably making the fields easier to manage.

I am still sure that with co-operation between the Highways Agency, land- owners, the University, and the relevant local authorities, high-quality surfaced routes could be created. A link north to the proposed local access road, with NMU routes, as well as a more direct connection towards Dry Drayton and Madingley, would complete this NMU network. Such a network would enable cycle commuting from Bar Hill, Dry Drayton and Madingley to the north- west Cambridge site and on into Cambridge, for all but the most timid or unfit. It would also give leisure access for walking and cycling to a huge area of otherwise inaccessible countryside for those on the new north-west Cambridge site.

Of course, if we fail to make progress on the direct route to the north-west Cambridge site, there is an easy and cheap alternative to some earlier proposals: close the Cambridge Road below the American Cemetery to all motor vehicles. Such point closures are contentious, but the alternative for motors via the roundabout at the top of the hill is only some 800m further. It has the added advantage that a significant proportion of morning peak motor traffic on this road is ‘rat-running’ to jump the queues on Madingley Hill. Surely the disadvantages of a slightly longer motor trip would be more than compensated by the reduction of motor traffic in the village?

Reducing the amount of motor commuting traffic into west and north- west Cambridge from surrounding villages, including Bar Hill, should be achievable if a good network of cycleable paths were available. Let it happen!