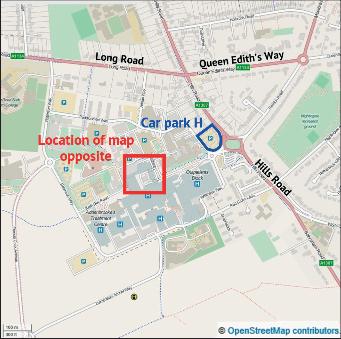 The shortage of cycle parking at Addenbrooke’s, especially at the Main Entrance where those accessing the main wards, lab block and clinical school, as well as administration areas, wish to park, has been severe for several years now. It is probably the worst thing about my job, even worse than getting on and off site which you can read about in the last edition of the Newsletter.

So it was pleasing, at a recent Bicycle User Walking Action Group (BUG-WAG) meeting, to hear that some new bike racks (56 spaces) were to be installed in an unused corner by the food court. These have now been installed. There are actually 31 Sheffield stands under a canopy. Sadly the design of the legs supporting the canopy means that some of the theoretical 62 spaces are not really accessible, as there is a leg in the way, especially if you have a wide or tall basket, are short in stature or have any mobility issues, so I would say that there are about 56 spaces in reality. The ‘secure’ shed nearby also seems to have had some work done on it, summed up I think by a coat of paint, which led to its temporary closure for about three weeks.

However, unbeknownst to most of the enthusiastic users of these new racks, their effect will quickly become entirely nullified once the ‘smartening’ of the area happens, which was also announced at the BUG-WAG meeting. This entails the removal of the easy-to-park-a-bike-on railings and their replacement with ‘glass and chrome’ ones, like those currently at the back entrance, which are impossible to park a bike on.

I’ve done a couple of mid-morning counts of cycles parked on the railings which are apparently due to be changed. Generally the older bike racks run at near 100% occupancy at all times during the working day, from about 8am onwards. The first occasion was before the new racks above had been installed. I found 72 cycles chained to these railings. This is 16 more than the number of new cycle parking spaces. Since there were also several bicycles parked insecurely, this seems rather serious. On the second occasion, the new racks were in situ and at practically 100% occupancy. This was not long after the works had been done on the secure shed, which I think a lot of people had not realised had reopened. Thus there were approximately 50 spaces free there. On the railings or not locked to anything however, I found 86 cycles, which appears to be a larger shortfall than on my first count, once I subtracted the 50 that could have been in the secure shed if people had known it had reopened. This was on a day when the morning had exhibited very thick drizzle throughout rush hour to mid-morning.

More bizarrely, one large bank of Sheffield stands (poorly spaced but well used nevertheless), nearest to the building with a large ‘ACT’ logo at the door on the main drive, was moved just before the main drive was partially resurfaced. They have been relocated to car park H, distant from any entrance to any building. The photos show the inevitable results. The stands in car park H are understandably virtually empty, and the remaining racks on the main drive, and many railings and anything else vertical or fixed down you can get a lock around, are all packed with cycles. A colleague brought up the issue that she was finding it harder and harder to get parked after her six-mile cycle journey each morning and was understandably getting quite annoyed. I queried the moving of these cycle racks with the Sustainability Officer but never got an answer as to what improvement was expected.

I’ve just downloaded the current Addenbrooke’s Travel Plan, www.cuh.org.uk/sites/default/files/Item%2012%20-%20Travel%20Plan.pdf, 10Mb with many glossy photos to slow down your computer if you want to take a look. The Campaign objected to the draft of it last year, but is mentioned on page 14 under the heading ‘bicycle – actions’. I still feel our name is being taken in vain as I had heard nothing about the action point, ‘Work with Cambridge Cycling Campaign to enhance Campus route options and improve Campus infrastructure for cyclists’ which is supposed to be completed by 2015. Since I wrote this, I gather they have offered to go around the site with us, in response to us contacting them. At least they have removed the phrase which was in the draft; ‘Making sure that our sustainable travellers feel really well looked after and cared for’ as perhaps even they have realised that is remarkable hyperbole. In our objection to the draft plan, we replied to this phrase by pointing out that ‘our members who do cycle onto site feel neither looked after nor cared for, and we would like to know how this aim is to be achieved.’

Do Addenbrooke’s really want us to cycle to work, or are all these lofty aims merely stated to keep the Council, and other authorities worried about traffic congestion and pollution, happy and to tick various regulatory boxes? Are we really expected to cycle to the Park & Ride site, park our bikes there and get the bus to work? 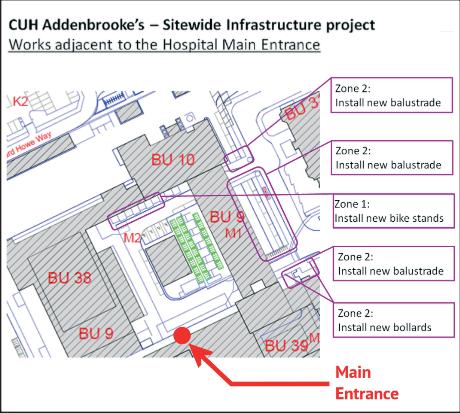 The point is that however unsafe and inconvenient it is for cyclists to get to work, there will continue to be a modal shift in people cycling onto the site, since all the other options for getting to the site are even worse (and cost a fortune). So the aims in the travel plan whether followed or not will miraculously come true with no effort whatsoever on the part of Addenbrooke’s. People cycling to work make no money in car parking charges, nor in inflated fares for the bus company. The fly-parked bikes will keep adorning every nailed-down object, and we will continue getting letters from members and non-members alike who are riled by the awful access and parking and ‘why haven’t we done something?’.

Or perhaps we should follow the car drivers and chain our bikes to the fences of the houses in the surrounding streets, blocking their drives and the like since that won’t be much less convenient than parking in car park H and might make a point?