The Busway is a huge success. It carries many adults and young people to and from many destinations, a major one being the Cambridge Regional College. Unfortunately, the volume of bicycle and pedestrian traffic along the line of The Busway at this point probably was not considered and is now causing problems. It will probably cause even more problems once the new Science Park station is built at the far end of The Busway. 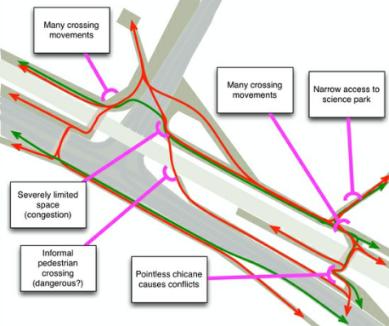 When I started looking at this junction, I tried to ignore what was ‘built’ and instead tried to observe how people moved through the junction. In the first diagram I’ve shown the main desire lines. Desire lines are where people actually move rather than those which engineers designed. For example, when crossing the access road to the college from The Busway, people walked in as straight a line as possible, ignoring the 90º turns required to use the toucan crossing.

Many people on bicycles do not bother with the toucan but instead just wait for a gap between the traffic light phases and quickly scoot across. Many people ignore what has been designed and have found new, possibly better, ways through the junction – for example, creating a path from King Hedges Road over bare ground. This informal crossing obviously works, but is it safe? Do the bus drivers expect people to cross at this point?

There are many conflict points, some less bothersome than others. The two biggest problems are at the bus stop exit junction with the Science Park entrance, and between the toucan crossing and the brick surround of the gas supply for the area. Cyclists may find many people trying to cross the road, especially after a bus has stopped, or just before classes are due to start, all getting in the way. Of course, we are getting in their way too, and this is not helped by the poor sight lines.

I would therefore summarise the problems as simply 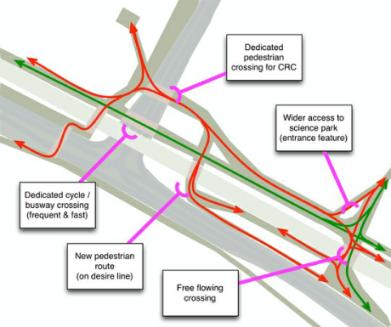 First, we should always respect people’s desire lines. They are voting with their feet, it is obviously safe enough for them to do it day after day, and they have left plenty of evidence that it works by wearing down the grass. So we should make this a proper pedestrian route. This actually has two benefits: it moves a lot of the pedestrian traffic to the west side of The Busway stop reducing the number of people at the Science Park entrance, and it allows a more ‘directed’ path to the north side of that brick building.

Second, we should separate the CRC traffic and The Busway traffic as much as possible at the CRC junction. The Busway traffic should follow their natural desire line which is straight on. There are wide turning splays for buses to access The Busway from the CRC, yet no buses do this. We should remove them and make a straight-on toucan in line with The Busway. The CRC traffic would be given their own toucan on the north side of the brick building. Some of the existing railings here (used as cycle parking) may need to be removed, and the stop line for motor vehicles pushed back a car length or so. The space between the stop line and the new toucan could usefully become an advanced cycle box.

Third, we should build a proper segregated footway to the north of the cycle track that links to the existing footway going to the ‘new’ toucan. This should be built like the Coton path such that pedestrian traffic would be encouraged to seek the higher and safer ground.

Fourth, we should straighten the line for access from the Science Park to The Busway. The current facility bends away from The Busway crossing, is very narrow, and limits the flow. I have seen times when people are queuing across The Busway to get through this gate. On the south side, the highly restrictive chicane should be removed. People happily cross The Busway at multiple points without problems, as here the buses are moving very slowly as they approach the stop.

Lastly, we should alter the phasing of the traffic lights. A simple desire for people on bicycles is to wait as little time as possible, but we take very little time to cross a road. Therefore, I would suggest that bicycles are given a green light between every car phase, but only for a few seconds. They should also be given a green light whenever The Busway is given a green light. The individual phases may need to be lengthened slightly, say from 25 seconds to 30 seconds to maintain the ‘capacity’, but the advantages it gives to bicycles would be huge. Also, the pedestrian crossing could be changed to a zebra crossing. This route would then become preferable to the slower toucan crossing, further reducing the numbers needing to cross there. It would also allow for a much more pedestrian-focused environment around what should be a highly walkable area.