Of course it would have been difficult to make the gutters on the new footbridge at Cambridge station worse, but it does seem that action is now happening to improve the wheeling channels.

The gutters installed on the footbridge some two years ago were not the expected channel section, but an ‘L section that was almost totally unusable. Most people carried their bikes or queued for the small lift.

Since then lots of trains have gone under that bridge, and more now stop at the new island platforms; while contractual issues have made improvements difficult, recently there has been action.

A channel section with an anti-slip mesh insert has now been bolted to the ‘L’ section. This currently starts at ‘ground’ level, removing one of the issues with the previous arrangement.

Life is never easy, and the requirements to help the disabled, the need to avoid trip hazards, and the facilities for an ideal gutter for those with cycles clearly conflict.

I met with an Asset Manager for Greater Anglia and a contractor making the changes one day in March, and we looked at some of the remaining issues with the gutter, and discussed possible tweaks.

It is not possible to move the gutter out any further or have a larger lead-in at the bottom as both would be perceived as a trip hazard, but the required lower handrail does cause problems. When I used the gutter my pedal tended to jam on the brackets that hold that lower rail. I saw one person whose pedals jammed on each bracket in turn. To avoid this, the pedal on the inside needs to be low or the bike tilted over further than appears necessary. Of course if you have a ‘fixie’ the pedals will rotate, but even my pedals tend to rotate intermittently.

Any bike needs to be tilted at an angle, but I deliberately took my bike with a stuffed pannier. To avoid contact with that lower handrail the tilt angle had to be so large that it was difficult to push, and I took up the space of at least two people. Of course I was just being awkward, as I could, at that quiet time, have used the other channel. At busy times or for those with two full panniers (say cycle tourists), it might still be necessary to queue for the lift.

So what tweaks are possible? 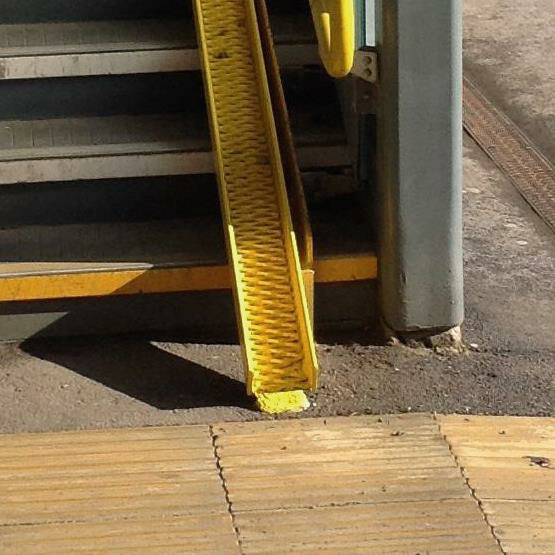 These changes do not come cheap, as works take place in the wee small hours when no trains run and most sane people are tucked up in bed.

Mistakes have been made here, and early consultations would have spotted many of these issues. Given the conflicting requirements, nothing will permit an ideal cycle gutter, but Cambridge would be a good place to user test a design that could be replicated elsewhere. Let others learn from mistakes here, rather than replicate failed designs.