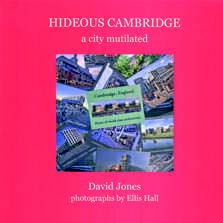 This book is a beautifully illustrated rant about inappropriate buildings, their size and their position, about traffic-filled roads, about the loss of Cambridge’s heart. This is a fun book to read. It is provocative, it is enjoyable.

If you know Cambridge at all you will be interested in Jones’s road-by-road, area-by-area, survey of the buildings that have gone up or are going up as Cambridge expands outwards and fills in empty spaces. The tone is often a sort of peevish waspishness that at times out-Pevsners Pevsner himself (does the voice of the retired schoolmaster echo here?). Jones is a good hater, which is one of the things that makes the book so enjoyable. The Castle Park complex of County Council offices opposite the corner of Huntingdon Road and Histon Road are ‘meretricious buildings of baffling silliness’. The Marque, a new edifice being constructed on Hills Road, is ‘outrageous, vile, pretentious and a positive disgrace; a visual catastrophe of staggering proportions’.

To this reader at least some of his judgements are perverse. Show him a nice bit of brickwork and he lies on his back and wags his tail however awful the building. So he likes the dreadful pastiche which is the nineteenth century Royal Albert Almshouses on the corner of Brooklands Avenue and the brick box which used to house the Comet store on Newmarket Road (‘very presentable’).

Jones wants the development of Cambridge to stop. He fears that it will soon have swallowed so many outlying villages and fields that it will be the size of Birmingham. He suggests the idea of Listed Towns, where an optimum size would be set and not allowed to be exceeded.

He’s not going to win that one. For all sorts of reasons Cambridge is set to get bigger and bigger.

He is right that tall buildings can spoil the character of the centre. The answer, if we grant the premise that the city will expand willy-nilly, would perhaps be to have a moratorium on any buildings more than five storeys high within a radius of three miles from the historic centre.

Jones is also correct in identifying the motor vehicle as one of the main factors in spoiling the ambience of the historic centre of the city -‘one of the biggest causes of ugliness in our environment’. He lists the proliferation of traffic signage, traffic lights, parking availability signs, roundabouts, pedestrian crossings, bollards, speed humps and road paint, to mention but a few of the uglifying additions to the visual environment. He complains of the noise and the noxious fumes. His answer – ban motor traffic, including buses, from the city centre, even as far out as Queens Road. He is right of course. Perhaps the impending imposition of 20mph speed limits on some of Cambridge’s roads is a sign of things to come.

This is a fine book about what is happening to Cambridge’s built environment and is of interest to all who work or live here. Perhaps it will inspire our councillors to demand a bit more of developers, architects and planners, so that Cambridge gets buildings more worthy of it than many of those erected in our recent past.

And if his traffic suggestions were followed, making this truly a city of pedestrians and cyclists, we’d have a far more pleasant place to live in.