Reducing the risk from HGVs for vulnerable road users in urban areas has to be high on any cycling campaigners agenda.

As a member of the Board of Cyclenation for two years, I’ve talked to a number of cycling campaigns and conferences about the benefits of co-operative working. I’ve now put cooperative working to good use by working with both the Campaign for Better Transport (CBT) and the Technical Advisory Group (TAG) of the Local Government Association (LGA). This uses my 35 years’ expertise about vehicle tracking on the issue of the ten-year trial of ‘Longer Semi-trailers’ (LSTs) by the Department for Transport (DfT). Reducing the risk from HGVs for vulnerable road users in urban areas has to be high on any cycling campaigner’s agenda.

I wrote on this subject some two years ago. See: www.camcycle.org.uk/newsletters/102/article7.html (Can our urban roads cope with longer semi-trailers?). Unfortunately, apart from local authorities becoming more aware of the issues, and such trailers becoming more common, little has changed.

CBT has put a lot of effort into getting acknowledgement by DfT of the issues caused by long semi-trailers (articulated vehicles) in urban areas.

In June 2013, with the help of TAG, a demonstration was arranged at Millbrook Proving Ground of a 15.65m trailer owned by Eddie Stobart. This was attended by two representatives of DfT and two of TAG as well as Philippa Edmonds of CBT and myself.

The driver was one of the team in the Vehicle Certification Authority who approves such vehicles. Unfortunately, because Millbrook is also used to ‘prove’ new car models, no photography was permitted. This trial demonstrated that with (inappropriate?) design such trailers can pass the manoeuvrability tests required under EU and Construction and Use (C&U) regulations. To pass the ‘concentric circle test’ a huge rear overhang is required, and at the end of the 90° ‘drive in’ test only about half the maximum steering lock has been applied, although the rear out-swing was within tolerance.

A sharper turn where the driver applied full lock at the start of a 90° turn produced radically different results, with an out-swing of 2 metres when the tractor unit had turned less than 90°. Because of the geometry involved, it was possible to show that a currently generally permitted trailer of 13.5m would have had an out-swing of under one metre with the same manoeuvre.

I tried to explain this to the senior DfT official in attendance but he proclaimed that he had forgotten his ‘O’ level geometry decades ago.

When I attended a preliminary meeting about these proposals at DfT with the London Cycling Campaign and Motorcycle Action Group, DfT fielded an administrator and an economist but no technical expert. I do worry that, although I know that technical experts may not be the best at administrative matters, relying on technical expertise only from those with vested interests can lead to failures.

There were clearly sharper turns that could have been demonstrated on that day, but with a ‘command’ steered trailer, where some of the trailer axles are steered by a linkage from the articulation angle, I did not wish to have a ‘foul’ called at that stage.

I’d also met with an engineer from a London borough who is an expert in using AutoTRACK, a development of my original research program (TRACK). We played with possible geometry arrangements and the sort of turns we know happen in urban areas at tight junctions and especially when such long vehicles get lost in residential streets. Some of these turns will be outside the manufacture’s specification, but they DO occur, as the black tyre marks at junctions often show.

At a TAG committee meeting in London, I, representing CBT, spoke and demonstrated some of the issues using a Meccano model. A joint press release, and a letter (with report and technical appendix) to the Secretary of State (SoS) for Transport, resulted. A question in Parliament then also followed.

You can see the press release and papers at: www.bettertransport.org.uk/media/18-10-2013-longer-lorries-report (Restrict longer lorries in urban areas say transport experts.).

The Parliamentary questions and answers are at:

The SoS’s reply was ‘The report has made very broad assumptions based on a single demonstration of a longer semi-trailer that was not representative.’

Of course I’m incensed by that reply. Why was an ‘unrepresentative’ trailer supplied? At least a ‘single demonstration’ is better than none! The DfT has failed to provide exact technical details of the trailer so our modelling with AutoTrack has just used our knowledge and experience. Given that AutoTrack is the tool used almost universally by Local Authorities and consultants when assessing junction design, why did not DfT or their consultants use the tool as part of their LST assessment? Instead they went to an academic group within Cambridge University Engineering Department that has clear connections with the heavy truck industry. See: www-cvdc.eng.cam.ac.uk

The adjacent diagram shows the huge amount of outswing that can occur on a sharp turn even when the design parameters of such longer trailers are unlikely to be exceeded. 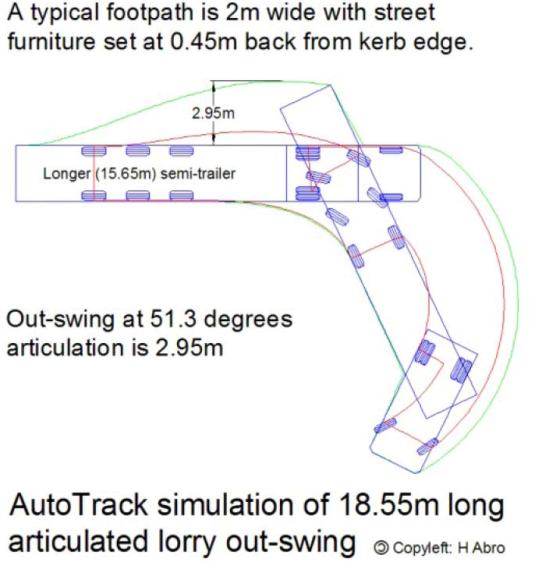 There is also a collection of photographs showing the difficulties encountered by even existing 13.5m trailers in urban areas. See: www.haibat.com/index.php?pageid=trucks

The failure to regulate HGVs in urban areas leads to many crashes and damage to footways and street furniture. Without restrictions on size it becomes difficult to modify junctions so as to make them safer for vulnerable road users, and prevent the damage that is an unrecoverable loss for local authorities.

Cambridge Cycling Campaign has many members who are experts in fields that fringe cycling, be they developers of software, experienced chartered engineers, or just ‘innovators’. The Campaign has much to gain by being associated with such experts. Let us wave the flag.