Could a cycle/pedestrian bridge over the railway line and guided busway, or a tunnel under them, be built between Homerton Business Centre at Purbeck Road and the cycle path alongside the guided busway? Such a thought was aired when we responded to a large development application at Homerton Business Centre for a teaching block, 132 study bedrooms, up to 95 residential units, commercial buildings and various infrastructure.

We commented that lack of permeability is particularly striking at Homerton Business Centre because in the immediate vicinity, on the other side of the railway line, there is a high-quality bikeway which offers convenient access for cycling and walking to many users . If the barrier of both the railway line and the guided busway could be overcome, either with a tunnel or a bridge, a major improvement for cycling and walking could be achieved. This applies primarily to students commute to Abbey College in Station Road faster, safer and more direct. There would also be benefits for residents of Purbeck House, and for the many students attending Hills Road Sixth Form College. In addition, such a bridge or tunnel would offer a very attractive connection from Lammas Land to Cherry Hinton, without using Hills Road Bridge. The benefits would apply to a very large number of local residents. 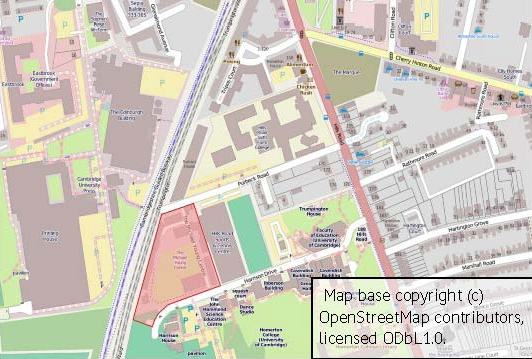 We also mentioned that it has been reported that residents of the Accordia site (Brooklands Avenue) use a car to reach Homerton Business Centre more than a mile away. However, the distance would be less than 0.2 miles with a tunnel or bridge. As development on both sides of the railway line intensifies (for example at the Cambridge University Press site), more and more residents will suffer from this kind of geographical isolation -discouraging walking and cycling.