Robin Heydon outlines his ideas for reducing motor traffic on East Road. These are his personal views, presented here for discussion, and are not a formal proposal from Cambridge Cycling Campaign.

There is much talk about going ‘Dutch’, but it is not often appreciated that some of the solutions that the Dutch use don’t involve building lots of segregated cycleways. Instead, they remove car traffic travelling through a city and move it to outer, better designed roadways. They therefore compartmentalise the city into segments with no way to get to other segments without going out and then back in again. 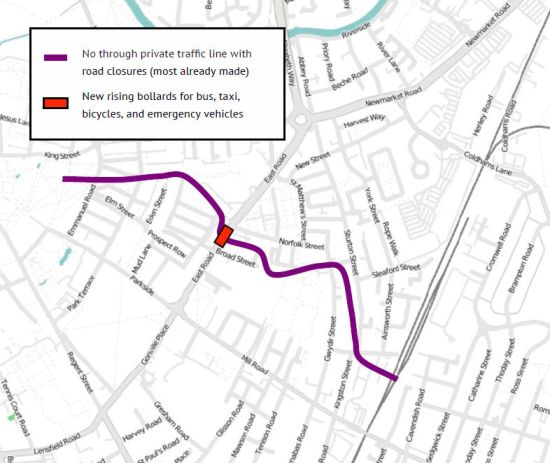 How could this be applied to Cambridge? Well, it already is in the city centre. For example, to drive from the Varsity Hotel on Thompson’s Lane to The Maypole pub on Park Street, a distance of just 160 yards, requires a 10 minute drive that is approximately 1¾ miles long. Nobody would choose to drive rather than walk, and that is the point.

Look at East Road between Norfolk Street and Mill Road. The space available is very limited and the road appears to be always congested, either with lots of stationary traffic or parked cars blocking lanes. It is horrible to cycle through and those important Park & Ride and city buses are continuously getting delayed with all that congestion. What would happen if we closed it?

What do I mean by close it? Basically the same as has happened successfully on Bridge Street and other locations in the centre. There are rising bollards to allow for buses, taxis, and other authorised vehicles, and bicycle bypasses.

Where would all the traffic go? Some would change to using the bus, some would change to riding a bicycle, or walking. Yes, some people would have to drive a little further to make trivally short journeys, but with good planning, your average driver won’t have to go significantly further for longer journeys where a car may be required. For example, to drive from the Law Courts to the railway station would involve driving out to Newmarket Road, to Coldhams Lane, Brooks Road, Perne Road, back in on Cherry Hinton Road, and then Hills Road. A taxi would now be three times quicker than driving yourself. A bicycle about twice as quick.

Of course the advantages would be huge. The approach to Newmarket Road could be significantly reallocated, creating more space for walking and cycling, as the only other traffic along here would be from the Grafton Centre car parks, the Law Courts, and parts of Petersfield. Similarly, the junctions at Hills Road and Mill Road could also be significantly reengineered to provide more space for bicycles once the inner ring road is no longer a rat-run for cars.

This would also enable other improvements on the Newnham to Newmarket Road (N2N) Supercycleway as the volume of car traffic reduces. For example, this could help remove sufficient car lanes at the Catholic Church junction for this junction to be made much safer for people cycling.

See www.cyclescape.org/issues/232 and www.camcycle.org.uk/newsletters/103/article4.html for more information about the problems and ideas for this route.

We obviously have to be careful not to push the traffic onto Mill Road instead, and perhaps the creative closing of short cuts between Mill Road and Coldhams Lane would be necessary as is already done north-west of the railway line. Similarly, access to the Adam and Eve car park may create a rat-run, primarily because of cars illegally using Adam and Eve Street to get to Burleigh Street. Instead, access to Burleigh Street could be from Crispin and Burleigh Places.

There would be other benefits. The police and fire stations would now be on one of the least congested roads in the city, allowing them to deal with life-threatening situations faster than currently. The shops along this road would have increased trade as people using bicycles or walking would find it much easier to stop and frequent these businesses than do those in cars. And, critically, there would be less pollution as fewer cars would be clogging up this narrow bit of road.