As anyone driving or cycling through the Catholic Church junction of Hills Road and Lensfield Road will know, this junction has been the subject of works to replace the layout.

We’ve been critical of the changes, and now that they are starting to be finalised, it is clear the problem of lack of space for cycling remains.

We have long wanted to see this junction ‘fixed’ for cycling. Along with all the other junctions on the inner ring road, there have been many casualties here. The issue here is quite simply the lack of space for cycling, something that the current changes have not addressed, as per our earlier criticism and campaigning. Every arm of the junction has three lanes of traffic – two lanes queuing and one exit lane. 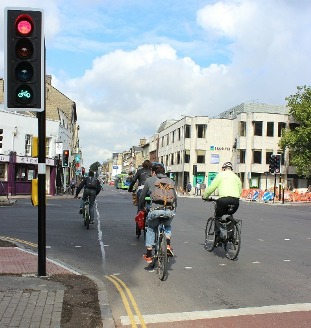 It is a signal replacement scheme, but it should have been a cycle safety scheme. The County Council insisted on the primacy of motor traffic flow and this severely constrained the signals team in their attempts to improve the junction for walking and cycling but with no detriment to motor traffic flow. They have worked hard within this limited brief to get as much cycling infrastructure in as possible.

The signals here were about 30 years old, and replacement parts had become unavailable. The layout was also very much a product of the 1980s, with multiple-stage crossings, traffic furniture everywhere, and generally dominance by motor vehicles to the sidelining of everyone else.

What has been improved here then?

We have the first advanced green light (on one approach only) in the UK approved by the Department for Transport (DfT). Coming from Hills Road while motor traffic is held at red, cyclists waiting in the new advanced stop box (ASB) get a filter green light for a few seconds before the main light turns green. The result is that cyclists who have reached the front of the queue at this point can move off before other traffic. This should avoid the problem of the left-hook by cars turning left across cyclists off the lights. This is the arm of the junction that has most cyclists.

The advance green light will only help cyclists who are already at the front. In the first few minutes of observation, we saw a car turn across a cyclist who had not indicated an intent to go left. The junction design has not tackled this fundamental problem, and our suggestion to paint a wide cycle lane over the junction, which might have mitigated this problem, was not taken up.

Even on the first afternoon, the advance green light does seem to be working quite effectively, for cyclists waiting at the advanced stop line (ASL). Cyclists are a little slow to move off so far (but this will change once people are used to it – this is after all the first such site in the UK). Car drivers do seem to be waiting for their light to change also. The DfT doesn’t seem to have permitted additional smaller lights at eye height that are common on mainland Europe. It seems clear to us they would be helpful here. The advance green phase does not trigger if no cycles are in the ASB.

There is an approach lane to the ASL with the advanced green light. At present, there is a bit of blocking of this by cars and buses, but this will almost certainly reduce once the lane markings are put in. (They are not currently, so it is too early to judge on motorist behaviour in this regard.)

What other cycle infrastructure has been added?

There are four advance stop boxes, but only one – the one with the light – can be reached safely via an approach lane. Without wide approach lanes the ASBs are basically useless, and at worst entice riders to make dangerous approach by squeezing between queuing vehicles.

Pedestrians are certainly seeing a more direct crossing, and that is very welcome.

But that’s all. An advance green light with an ASB, and three ASBs that can’t be reached, does not make a cycle scheme.

The silver lining is that the changes unlock the potential (merely the potential – politicians seem uninterested in prioritising cycle safety here at present) for future changes. The removal of all the old street furniture means replacing traffic lanes with (un-segregated) cycle space is now much easier. The cost of the scheme has surely been increased by the fact there is an old public toilet beneath the junction. So the scheme has unlocked this future potential – so it is money that would have to have been spent if any changes are to happen. That is why we felt it was better than nothing.

The junction here cost an incredible £900,000 to change. Half of this, £450,000, has come from a specific cycle safety fund, to which Local Authorities had merely nine months to bid, accept funding, design and implement schemes – a ridiculously short time-scale which guarantees that any serious cycle safety scheme cannot be achieved. It seems that the quality of bids was extremely low, meaning that even schemes like this which objectively fail to improve cycle safety in any significant sense got funded.

We will continue to press for the principle of road space allocation here. County Councillors said ‘we can’t go all the way this time’. We accept that some of the suggestions we made would have needed to be phased over time. But it is clear there is not the political will for road space reallocation yet, despite the clear need for this because of massive housing growth in Cambridge which can only be catered for by much higher cycling levels. Our suggestion that a study on the ring road south junctions be included in the funding bid, was not taken forward – something that would have released the logjam of ‘but changes here would have knock-on effects, so we can’t do anything now’.

Councillors need to realise that bicycles are also traffic, and until they allocate space to cycling, congestion will not be reduced.

Will this junction encourage new people to cycle?

Will this junction encourage new people to cycle? Absolutely not. Will it deal with traffic congestion in the area? No, the county basically has a policy void on that.

We think the use of almost half a million pounds of cycling safety money, to fund a signalling scheme dressed up as a cycle safety scheme, is a scandalous misuse of public funds for cycling. Arguably public funds have been spent in the interests of the public. Just not the cycling public for whom they were intended.

This is a good example of why Cycling England was so important – it provided strong scrutiny over effective use of public funds, helping Local Authorities to deliver cost-effective cycling infrastructure.