All the approvals have now gone through committees to replace the twin mini-roundabouts with traffic lights at the junction of Lensfield Road, Fen Causeway, Trumpington Street and Trumpington Road, outside the Royal Cambridge Hotel. Work will start there in early May (no coincidence that this is just after the Council elections). 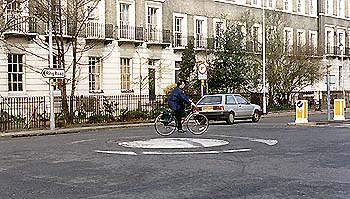 One of the consequences of this change is the banning of right turns into and out of Brookside, the little road that runs the other side of Hobson’s Brook from the junction. We met with engineers from the Environment and Transport Department a few weeks ago to look at ways we could reduce the impact of this on cyclists.

As a result, some improvements will be made to the little bridge across the Brook, on the Trumpington Road arm of the junction. This will make it easier to turn left. We suggested moving the pelican crossing a car’s length away from the bridge. If this is approved, cyclists wanting to turn left across the bridge won’t tangle so much with crossing users (the majority of whom are cyclists as well). There will be a little slip lane to allow cyclists to get out of the traffic stream before crossing the bridge. The bridge will also be properly surfaced: it is abysmal at present. 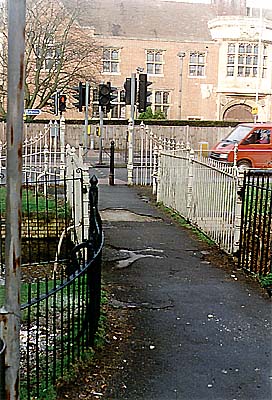 We pressed our suggestion again that cyclists should be allowed to use Panton Street in both directions. This was felt to be more controversial, and we need to pursue this separately. One possibility is to review all the current one-way streets in the area (apparently called Newtown). Newtown is unusual – many other parts of the City have no-entry signs with a cycle gap alongside instead of one-way streets (St Barnabas Road, for example).