As anyone who has been into town recently cannot have failed to notice, Bridge Street has now been closed to most traffic. Cycles have a gap to get through, buses and taxis activate the rising bollards, and, to prevent rat-running through to the car park, only cycles can pass through bollards at Park Street. It’s taken a couple of years to get to this stage: it was first mooted around the time we were discussing forming the Cycling Campaign.

It is much pleasanter for cyclists using Bridge Street now, and pedestrians too, I think; however, it is still not without problems. In particular there is now a nasty taper at the end of the pavement widening just before the barriers heading south, which forces cyclists out into the path of buses and other vehicles. There has already been one collision here. 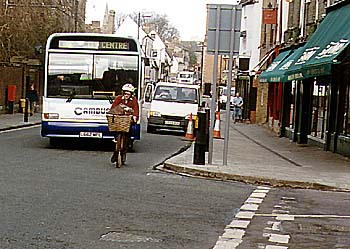 Also, at St John’s Street no one seems quite sure where they should be on the road and who has right of way. We’ve asked for this to be clarified.

The scheme is officially an eighteen-month experiment, although it seems highly unlikely that it would all be taken out again after that time. However, details may well be changed. There will be two rounds of official consultation, this summer and at the end of the year. In the meantime, we’ve had some more informal consultation and there will also be discussion about the possible narrowing of Magdalene Street at Magdalene College in mid-April.

As it stands, there are clearly some problems. Foremost is the volume of traffic going into Thompson’s Lane, only to emerge again after a few minutes. This accounted for 94% of the traffic in that street a couple of Saturdays ago, indicating that, despite the signs, drivers were not used to the scheme and were trying to reach the car park. Some more signs have just gone up at the time of writing. No doubt people will get used to the new layout over time as well. We’ve asked for some changes to the signing at the Castle Street traffic lights.

Some drivers have been running the barriers. There have been a number of crashes into the barriers. In the few minutes I stood and watched, a Range Rover ducked through behind a bus. 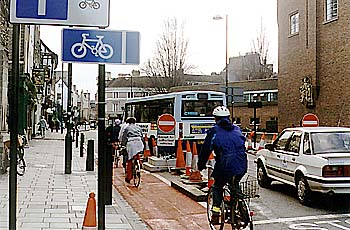 Tailing a bus through the Bridge Street Barrier

There have been knock-on effects as well. Castle Hill is now much quieter. Since cyclists were majority users there at some times of day, this is excellent news. However, Victoria Avenue and Victoria Road are carrying more traffic. Whether there has been an overall reduction, we don’t know.

If anyone has observations to make, or would like to get involved in our future responses to the Council, please let me know.