Notes on a conference organised by RoadPeace and the European Federation of Road Traffic Victims (EFRTV), February ’97

Every year in Europe, more than 50,000 people are killed in road crashes and more than 150,000 permanently disabled. Thus, 200,000 more families experience bereavement or disability yearly: at present at least 6,000,000 people, whose plight is often underestimated if not ignored, are suffering in this way. World-wide, some 100 million are affected by death or injury on the roads.

EU-sponsored studies in recent years have produced wide-ranging proposals for reducing road danger, with a predicted cost/benefit ratio ranging between 1:10 and 1:100. Thus, an investment of £1000 in road safety would yield a saving of between £10,000 and £100,000. From an economic view alone, society would realise a handsome profit, even without taking into account the saving in human suffering.

The economic cost of road crashes in the EU, according to the study COST 313 undertaken by 14 universities and published by the European Commission, is an annual 200 thousand million ECUs (about £150 thousand million) – roughly equivalent to the yearly production cost of Europe’s more than 10 million cars.

The impediment to road safety is political, not technical or financial

The EFRTV (comprising 16 organisations in nine countries) has conducted systematic studies on the plight of road traffic victims, involving nearly 10,000 families, and revealing a depth of distress that otherwise passes largely unnoticed. The majority suffer a marked and chronic decline in their quality of life. Most report receiving no information about sources of assistance, legal or otherwise. The enquiries show deep and widespread dissatisfaction with both criminal and civil justice systems, and British victims expressing the lowest satisfaction of all – 97% of the bereaved and 100% of the disabled in the UK felt they had been denied criminal justice.

‘The comments we received relating to criminal proceedings point to the “Careless Driving” charge and the frequent lack of any prosecutions – particularly with injury – as the greatest source of grievance. British families also frequently complained of a total lack of information about inquests and the denial of their rights.’
– Brigitte Chaudhry, National Secretary, RoadPeace.

The ‘troubled and complicated’ history of this area of criminal law was outlined by Nicholas Atkinson, a barrister with wide experience in the field. The impression was of a judiciary out of touch both with the specific effects of various legislative initiatives and with the extent of popular dissatisfaction.

The progress of law reform has tended to reflect changes in social attitudes to motoring. “During the first half of this century, if you caused a death as a result of bad driving it would have been treated like any other case of gross negligent manslaughter.” But with the advent of mass motorisation and its ideological trappings came greater toleration: juries became reluctant to bring manslaughter convictions. From such toleration, it seems, arose the 1956 Road Traffic Act and the statutory offence of Causing Death by Reckless or Dangerous Driving, establishing the precedent for a separate status for motoring violence that has plagued seekers of justice ever since.

Over the following years, a succession of Road Traffic Acts, Law Commission reports, Appeal Court rulings and Magistrates’ Guidelines saw both the definitions of motoring offences, and their application by the enforcement agencies, chop and change with little obvious regard for justice or logic. While these changes dealt mainly with redefining ‘serious’ offences and maximum penalties, such charges were rarely applied, and the maximum sentences – often hailed as the remedy for road safety – almost never. Increasingly, the vast majority of dangerous driving cases attracted the trivial Driving Without Due Care and Attention charge where, to the especial distress of the bereaved and injured, killer drivers are not recorded as such and the victims need not even be mentioned in court (on the grounds it is the behaviour, rather than the consequences, that is being judged; notwithstanding that the behaviour is scarcely ever punished until some tragedy ensues). As Atkinson put it, ‘We have drifted from dangerous and reckless, to reckless, back to dangerous… and have surely lost sight of the central feature which is one of a violent death.’

Present law derives largely from the 1991 Road Traffic Act, which purported to tighten up on dangerous and killer drivers who had previously been escaping serious charges. Whatever the intention, the opposite effect has occurred, with fewer prosecutions and even fewer convictions (with the exception of drunken drivers) than before the Act, and with an apparent knock-on effect on the numbers and conviction rates for Careless Driving – inexplicably, since the Act did not change this offence. No responsible authority has claimed driving standards have improved.

As the joys of mass motoring become submerged in pollution, congestion and environmental degradation, so attitudes start to change once more, and the clamour of victims of road violence finds ever greater resonance, albeit tempered by bitter frustrations. Last year (1996) the Law Commissioners were considering the reintroduction of motor manslaughter charges (which have always been technically available) to cover fatal-case offenders generally – a move RoadPeace has long been pressing for. The Commission rejected such a change, however, opining that it ‘would be unwise to amend’ the current laws ‘which appear to be working satisfactorily in an area of the law which has had a troubled history’.

While no real justification was offered for this outrageous conclusion, reference was made to the evidence given by the Crown Prosecution Service, which described the continued existence of the concept of gross negligence manslaughter as ‘an irritant’, since it is unclear when manslaughter should be charged rather than a statutory offence; prosecutors felt pressure from the public to charge what is perceived as the more serious offence. ‘One might add, “correctly perceived”,’ remarks Atkinson. Much as it may irritate the CPS, for those at the pinnacle of law to excuse leniency by reference to public toleration of bad driving, as they did in the 1950s, seems insupportable. RoadPeace was not consulted.

Another, and perhaps more insidious, factor in the Law Commission’s deliberations was the intervention of the Campaign Against Drinking and Driving. Noting its satisfaction at the effects of the 1991 Act, CADD claimed that ‘juries were now ready to convict for road deaths’, and ‘that to start tinkering again with the law in this area would be a retrograde step’.

This was clearly nonsense, but drink-driving legislation has always been a somewhat two-edged weapon. It may well be that drunken drivers, when caught, face greater penalties than before, but six out of seven road fatalities do not involve alcohol, and here the law is manifestly failing. It is not to excuse drunken driving to observe that it is much easier to measure blood alcohol than to quantify degrees of bad behaviour; it is easier to punish people for being drunk than to punish homicidal driving per se. My own view is that this strategy has, from its inception, been employed as a diversion from the central issue of making irresponsible motorists accountable for their own actions. Rather than address this, legislators have been anxious to be seen to be doing something in response to public pressure. On the other hand, here is an instance of law reform leading to a significant shift in social attitudes. Who today would argue for abolishing the breathalyser, or for letting off first or second offenders? And who, some time in the future, will be campaigning against the automatic disqualification of first-offence, no-excuses-brooked, speeding motorists? 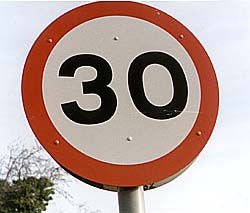 ‘The official stature of secondary victims of crime is precarious indeed, and at their margins stand the survivors represented by RoadPeace. Seven times as many are killed on Britain’s roads as those lost through homicide. Their deaths are quite devastating, leading, as the report from the EFRTV makes quite clear, to deep grief and all the symptoms of post-traumatic stress… And all that can be exacerbated by the frequent failure, indeed the apparent incapacity, of the larger world to recognise that suffering, acknowledge the presence of the survivor or to regard much of the violence at the core of road deaths as properly criminal. The very term conventionally applied to road deaths – “accident” – has connotations, as the OED reminds us, of “chance, fortune and the fortuitous.” It slights what has happened, making it seem inadvertent, a matter of chance. RoadPeace prefers the term “crash,” a word that at least summons up the imagery of violence. But “crash” still fails to imply deliberation or callous disregard for consequences, even though that may be the cause of many fatalities… There persists a casual attitude to offences on the road which not only enables the bereaved, as secondary victims, to be overlooked, but also ranks the injured, as primary victims, well below the victims of other forms of negligence or assault.

‘These are oppressive omissions, and they make the job of RoadPeace and the European Federation even more arduous. RoadPeace, the national voice of road victims in Britain, has been at the forefront of campaigning for secondary and primary victims to be recognised and helped. In so doing, it has questioned the casual assumptions we may have entertained in the past about road death and injury. Road crashes lead to major problems which are masked by scholarly, journalistic and political inattention, conventions of legal classification and euphemistic language. This report on the impact of road death and injury on victims and their families should enable us to see matters more intelligently and sympathetically. Perhaps it will allow us to understand the needs of victims a little better…’