The latest data from the 2011 census are out and they are interesting. Cycling has grown significantly in Cambridge and in some areas around Cambridge. The number of people cycling to work in many places now outnumbers those driving to work. But before we get carried away by the rhetoric, let’s jump into the numbers. 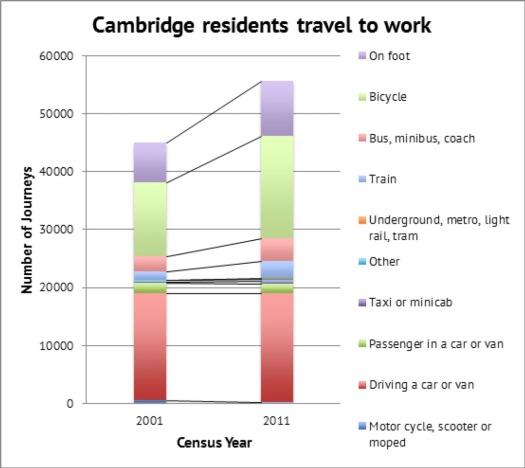 From the graph, you can see that the number of people driving or being driven, or riding a motorbike, scooter or moped, has stayed pretty constant. Growth of jobs and the economic activity that was generated by these jobs did not increase because more people drove cars. The growth in commuting was mostly accommodated by people using public transport, riding their bicycles, or walking to work. However, it should be noted that even people who mainly used the train may have used a bicycle to get to the railway station, although the data does not show this.

Trumpington had the largest increase in the use of bicycles. Was this because of a nice new cycleway from Trumpington to Addenbrooke’s, the city centre, and beyond? Next was East Chesterton – can somebody say Riverside Bridge?

The slowest bicycle growth rate was in Cherry Hinton, with an increase of only 18.9%. However, this must be taken along with the data showing a 5.9% reduction in the use of cars in Cherry Hinton. More journeys with fewer cars.

Let us not forget the contribution that buses have made to reducing the number of cars on the road. Arbury for example doubled the number of people going to work by bus to work.

Also interesting are areas that appear to have not done very well. West Chesterton had low levels of bus and bicycle use. Could this be because of the serious problems around Mitcham’s Corner gyratory system?

The top ten cycling parishes beyond the City of Cambridge are:

In 2001 just 2,692 people in these ten parishes cycled to work. In 2011 this increased to 4,019. This is still not Cambridge City levels, but compared with the rest of the UK this is still a very high cycling rate. Compared with Denmark, the Netherlands, even parts of Germany, these numbers are way too low.

There are some shockingly bad cycling numbers in South Cambridgeshire. Bar Hill lost one third of the people who used to ride a bicycle in 2001. And there are places like Balsham which only have 1.7% of people riding to work. There is much work to be done to raise these places up to the 11% South Cambridgeshire background rates.

Given that in some wards there are now more people cycling to work than driving to work, perhaps now is the time to call for real priority for bicycles within Cambridge. Giving cycle tracks priority over side roads would be a good place to start. Obviously we also need more bicycle parking spaces, and safer junctions. All these will take time and money, planning and political will.