In early December, I was alerted that employees who work on the Addenbrooke’s site were being asked for suggestions for the location of extra cycle parking on the site. However, the time scale between hearing about this and the deadline for submission of suggestions was very short, at a very busy time of year when lots of other things were going on, so trying to get comments to be able to submit as a document from the Campaign was clearly impossible. I therefore submitted some suggestions which I’ve summarised below, as a private individual and as an employee who works on the site.

I gave some ideas, based on the article I wrote for Newsletter 100, for areas where a few extra cycle parking spaces could easily be placed. However, since then, I’ve been occasionally thinking about the problem, and decided that I might as well throw caution to the wind and come up with some radical ideas, some of which I discussed with one or two other site employees who thought they were worth putting into the public domain.

There seems to be an emphasis on making sure new buildings on the rapidly expanding campus are each supplied with adequate cycle parking. This is excellent. However, the main areas of major shortage are around the ‘older buildings’, namely (see plan below) (1) the Main Hospital Entrance to all wards, (2) Lab Block, (3) Accident and Emergency, and (4) the entrance to the Clinical School. I note that land in this area where extra, conveniently placed cycle parking could be located is in extremely short supply, if not non-existent.

A radical suggestion to increase cycle parking capacity in this area

When the Patient and Visitor Main Multi-storey Car Park (MCP) (5) was built, cycle parking was originally part of the initial planning process but was never provided, apart from some temporary parking at the back which was removed when the Deakin Centre was built. I feel it is time to revisit this area. I suggested that much of the ground floor of this MCP should be altered to change it from car to cycle parking. An inspection of the MCP at 12.30pm on a working day showed that the top floor was only about ¼ full, thus the car park is not being used at 100% capacity. Another MCP is already planned for the site, with more convenient access for the Rosie Hospital and Treatment Centre, so car parking capacity is due to increase on site. If this cycle parking were secure (staff card access to cages), and good quality (Sheffield stands at 1m spacing) and cyclists could cycle all the way to the entrance of the cycle parking area (not having to walk several hundred yards from the road) it would in my opinion be close enough to the Main Entrance via the bridge over the Goods Yard entrance to attract many employees who are wanting to park their bike for seven or eight hours at a stretch. This would, at one fell swoop, largely solve the dire lack of cycle parking space associated with the ‘older buildings’ as described above. If secure, it might leave the open access racks nearer to the Main Entrance and Outpatients much emptier for the use of visitors and outpatients and other casual or non-full-time visitors to the main hospital. 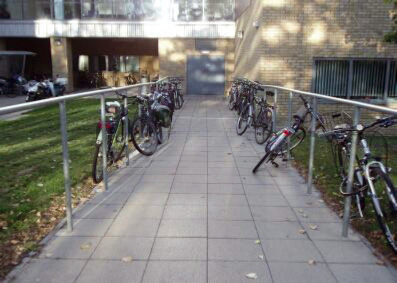 I also suggested two other larger-scale locations which I feel should be examined as sensible places to put decent-sized cycle parks.

Since the fields outside the boundary of Robinson Way are earmarked for building in the future, thought should be given to planning cycle parking ahead of the piecemeal solutions each individual new building will come up with, however good these are, since each building will plan for the capacity it needs, possibly making that parking exclusive for occupants of that building, not taking into account the initial overall parking shortage. Thus, while there is still land available, some should be earmarked for cycle parking for the general use of all staff and visitors, whichever building they work in, but especially the older ‘shortage buildings’, before this land is all built on. There may not be funding available immediately to build the cycle parking, but if it is in the overall site plan, then the land cannot be lost to other uses. I would suggest an ambition of 200-300 spaces at each location.

My suggested locations (see plan above) were:

(A) at the junction of NCN11/the Genome Path and Robinson Way;

(B) where the Busway cycleway joins Robinson Way.

I noted when I looked at these two areas that there were many fly-parked bikes along Robinson Way, presumably as some employees park there, and then take the nearest entrance to get to their place of work. Other employees probably cycle around to the Main Entrance to park, after coming across from Shelford or Trumpington, as there are few places to park on Robinson Way despite there being several entrances to the hospital. Thus adding extra parking here might alleviate some of the parking problems seen around the Main Entrance. As a proper survey of routes used by staff has never been undertaken, it’s impossible to know exactly what is needed. Perhaps, as part of this cycle parking investigation, the Trust management should be thinking of doing precisely such a survey? This might also help provide information leading to an improvement in road safety on the site, thus ensuring that any money spent improving parking or safety is spent in the best way possible. 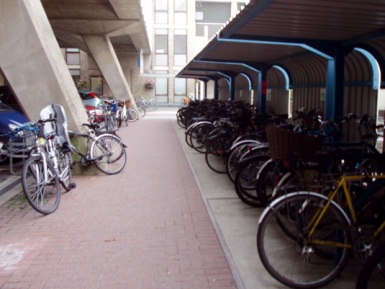 I also made a couple of other general comments. The first was to remind the Trust that cycle parking provision could possibly be designated a sex and age discrimination issue for employees, if new parking is of a design and accessibility that only taller or stronger people can manage to use it. I also suggested that perhaps putting new buildings on stilts, so that the entire ground floor area could be used as cycle parking might be a good idea. I didn’t point out that given the current state of some of the more low-lying areas to be built on, this might also be a good flood prevention measure for the building concerned, albeit at the cost of wet feet for those hoping to park! 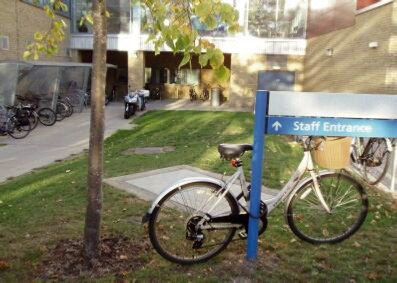 I have just heard the results of this consultation. The document I’ve been sent with the collated suggestions from various employees doesn’t even include most of my suggestions, especially the ones above. It is unclear as to why these ideas have been omitted from this document rather than just marked ‘not feasible’. There are some good suggestions from others, most of which are commented upon as ‘not feasible’, and a few which may result in a few more spaces at the fringes of the hospital site. It feels as though Addenbrooke’s is trying to demolish a mountain using a teaspoon.