From the Cycling Campaign’s earliest days, cycle parking at the station has been one of the biggest problems we have grappled with. Now, at long last, it looks like a solution is in sight.

Early in January, Brookgate, the station area developers, were to submit a planning application for the anticipated multi-storey cycle park with about 3,000 spaces, between three and four times the current number of spaces on the ground. They presented the plans at our December monthly meeting. Sketches and a couple of video fly-throughs are available on their web site. www.cb1cambridge.eu/the_site/videos/cyclepark. 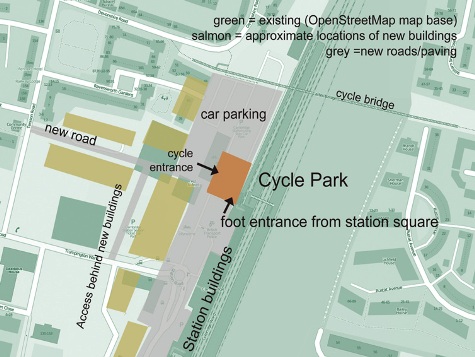 This follows lengthy discussions over the years between the developers and Network Rail, the City Council, the County Council and the train operating company (currently Greater Anglia, part of the Dutch company Abellio). We have been involved in the discussions over many years, frequently over the last two years. The number 3,000 came out of some of the very early campaigning we did on the subject. It looked like a huge number then: is it perhaps already beginning to feel a little on the tight side.

Assuming planning permission is granted, and we certainly hope it will be, construction could start toward the end of this year with a view to opening in late 2014 or, maybe more realistically, 2015. Many other parts of the whole station development depend on this as, we understand by legal agreement, the existing cycle parking cannot be removed without providing the alternative.

Where will it be?

The cycle park will be just north of the station, alongside platform 6, but because the area around it will also change substantially some context is needed.

The building will also house a hotel, which will face onto the new station square. This piazza will be considerably larger than the open area now is, extending over much of the current cycle parking and the short-term/season ticket car park and including what is now the orangey-coloured office block on the corner of Station Road.

While the main car park will not be that much different, drivers will reach it from a new road running south from Tenison Road. At the end of this new road, cars will turn left into the car park or right for the drop-off area (and taxi rank) in front of the hotel.

How do you get to it?

Cyclists will, of course, also be able to use this new road, so there will be three main directions from which cyclists will approach the cycle park:

Sooner rather than later, we hope that the Chisholm Trail from the north will also connect under the Mill Road bridge.

It will also be possible to avoid the station square from the south using new roads between the buildings. For example, first left off the new link road at the bottom of Hills Road bridge will take you behind the Mill, across Station Road, to the new road just west of the cycle park.

How will you get in?

The cycle park entrance is planned on the west side of the building at the end of the new road. Unfortunately, the entrance is also on the car exit from the main car park, but the plans call for measures to control this and it certainly should not cause anywhere near as much conflict as the current situation.

The cycle parking is mostly on the first and second floors. There is a small amount of space ahead of you as you go in for bikes with trailers, trikes etc, and for disabled riders. There is also a bike shop on your right, and a small convenience shop of some kind on your left. Most cyclists wanting to park will, however, go up to the first floor where there are mostly two-tier racks. We are told about 14% of the spaces will be Sheffield stands (including those on the ground floor); the rest are two-tiers.

Access to the first floor is by very shallow steps facing you as you ride into the building. These will have purpose-built ramps for pushing bikes, based on Dutch examples, with a gradient of 1:6. While it is tempting to compare these with the dreadful channels on the new station bridge, there really is little similarity with these built-in ramps of a completely different design. There will be room for very high flows in both directions.

There is then a similar stepped ramp up to the second floor.There has been some disquiet about not being able to cycle to the parking stands. However, given the rather compact shape of the building (compared to earlier designs), it is hard to see how a shallow enough ramp could be built inside. And if a ramp were built outside, it would have to be approached from one direction only, so those coming from the other two directions would have to make a long detour to get into it. 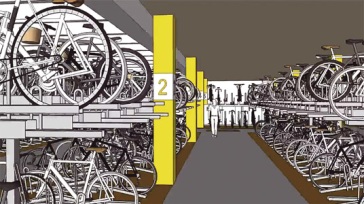 How will you get out?

Ordinary steps lead from the corner closest to the station down from both floors into the station square. You will emerge near where the police station entrance currently is, and then use the ticket hall (which will be enlarged) as now. Of course, coming out of the station, you do the reverse.

It seems so perfectly obvious, however, that there should be a link between the first floor of the cycle park and the new station bridge. We have raised this repeatedly, and the developers will build the structure so that it is possible and practical to do this in the future. However, while the train company has not ruled it out, we have been met with distinct indifference when pressing this. The reluctance is presumably the staffing commitment needed (barriers and a ticket machine ought to be trivially easy). We think many people using platforms 7 and 8 would appreciate this, not just cyclists.

What about the racks?

As mentioned, these will mostly be two-tier. The developers came to the same conclusion as us about which were the most suitable of the two-tier racks. However, the sheer number means that the manufacturer is prepared to tweak the design to deal with criticisms.

Will there be any other cycle parking?

There will not now be any cycle parking at all, we understand, in the station square. All of the new buildings around the square will be required to have cycle parking included for staff to the standards demanded by the city council: for example, the plans recently submitted for the office blocks on the west side of Station Road have hundreds of spaces included: 576 spaces for staff and visitors.

New residential blocks alongside the new road and the building that will face onto the west side of the square will also have their quota, but we haven’t seen plans for these yet.

The cycle park will not be restricted to those using the station. While this is both practical and positive, we do have to watch out for what happened at the Grand Arcade where half the spaces were effectively ‘stolen’ and then all sorts of other city developments, notably Christ’s Lane, pleaded that there was now a cycle park so they didn’t need to provide any. To our dismay, the council bought this argument, which is why there is now once again a desperate shortage.

What hours will it be open?

The plan is that the cycle park should be open whenever the station is operating, for example, from half an hour before the first train to half an hour after the last. It would close for a few hours in the dead of night.

It will be security-controlled both by CCTV and the personnel who secure the rest of the station. This is not just (or even) because of the bikes, but because the station has high security requirements imposed on it as a potential terrorist target.

The opening hours still have to be confirmed, and we also need to be sure that if the last train is delayed you will not find yourself locked out.

Will it cost anything to park? 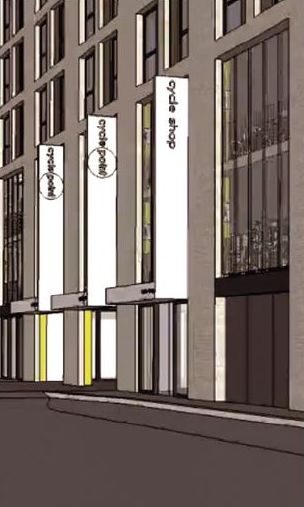 The park will be operated by the train company, so this is not something the developers have a direct say in.

Abellio were somewhat equivocal about this when we saw the plans at our December meeting. While they said they would expect it will be free to park (except possibly for a small number of premium spaces), they were definitely leaving open the possibility of charging at some point. If that were attempted, it would sink the whole scheme and there would be bikes flyparked everywhere. It would be crazy to try it! Indeed at an earlier meeting with a city council planner present we heard an agreement made that there would be a maximum of 5% chargeable spaces.

We’ve been calling it the ‘cycle park’ here. But in fact Abellio will brand it ‘Cycle Point’, reflecting what’s been done elsewhere, aspirations for other stations (including Ely, for example) and that there is more to it than just parking. This will be by far the largest such Cycle Point: indeed the largest cycle park of any kind in the country. Dutch stations, with parking for tens of thousands of bikes, dwarf it of course!

We should be clear: the principle of a cycle park was decided long ago. The original formal master plan agreement for the area included it, but for 2020. The need to construct the development in a particular order has made 2015 opening likely now. Once the planning issues have been decided, this year, construction should soon start.

There is much reluctance from the rail company to lose even a single car parking space. However, should 3,000 spaces prove too few in future, there is the technical possibility of extending the building over the top of the car park. But someone would need to pay for that, of course. We may also see demand for car parking reduced given that the Chesterton Station may become a much more attractive option for drivers to get to. So the concern over preserving parking spaces may not be so great in the future.

We shall continue to work with the developers and rail companies and keep a close eye on the development as a whole and the cycle park in particular, as we have in the past.