Recently one of our members wrote the following email to us.

I wonder if you can tell me what the rationale is behind the footbridge over the Cam at the Green Dragon pub not being officially open to cycles? Having moved house quite recently, the bridge is now part of my commute, and I don’t understand why I am not supposed to cycle over it.

I would like to register a complaint to the council or whoever is most appropriate. Please could you point me in the right direction?

The explanation and advice from our Liaison Officer

As far as we are aware there is no legal restriction on cycling. There is a photo of the sign on our photomap see: www.cycle.st/p30278. Although it says ‘No Cycling Cyclists Dismount’ it is a rectangular blue information sign. Note that the adjacent round red-margined sign with a picture of a motor bike is a ‘prohibition’ sign. If you ride over on a motorbike you are breaking the law, whereas if you cycle over you are just not taking the ‘advice’ on the sign. 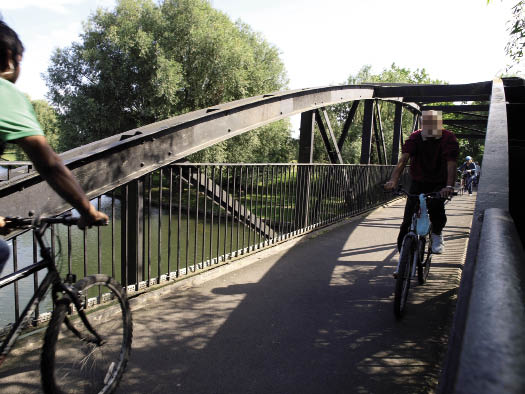 The Highway Code is quite clear about the difference between rectangular information signs and round prohibition ones.

We have worked hard to get things improved here, but it is the intervisibility of those on foot, who may feel threatened by a bike appearing from ‘nowhere’, that causes problems. Keeping the vegetation clear on the Stourbridge Common side helps, but it is the conflicts at either end that give most problems.

On the Water Street side we have suggested the removal of a few car parking spaces, and moving out the footway, such that those walking on Water Street can see more easily those on cycles descending the bridge (and vice-versa). On the common end, a rearrangement of the paths could reduce conflicts. Both these are controversial. Removal of car parking would require a Traffic Regulation Order which would, no doubt, cause objections. Any new tarmac on the commons will always cause objections even if the net result is a smaller area of tarmac. 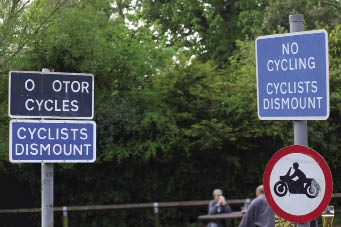 You should in the first instance write to your local county and city councillors and object to the signs. Copy those letters to the county and city cycling officers. Involving your local city and county councillors, even if the bridge is not in their area, is important. I’m not suggesting that any or all of those people oppose any changes, but the more people who write and complain, the greater chance of some positive action.

Incidentally, your long memory is correct about the Fort St George bridge. The addition of the metal bars at the blind corner on the town side means that those on foot can go on the inside, but bikes cannot practically go on the inside, so go outside. This has greatly reduced reduces conflicts. Those with pushchairs may need to go on outside the bars, but they can then see bikes and those on bikes can see them. The high walls prevented that intervisibility, hence the fear of collisions, which has been removed by the addition of those simple bars.

I hope that, at the least, partly explains the (unsatisfactory) position. If you are considerate to those on foot at the ends, cycling over the bridge probably causes less congestion than walking with your bike.