The National Trust has two fine and very popular properties both about ten miles from Cambridge, Anglesey Abbey to the east and Wimpole Hall to the west. It’s striking, however, that while there’s excellent access to Anglesey Abbey by the National Cycle Network’s route 51, there’s no decent cycle route to Wimpole. It would be great if one could be found, and I offer a few suggestions here.

The CycleStreets route planner (www.cyclestreets.net) gives three options from Newnham: a quiet route via Barton, Comberton, Toft and the Crane’s Lane bridleway from Kingston to Wimpole Hall; a fast route by the A603 towards Sandy, and a balanced route through Haslingfield, Barrington and Orwell. From Newnham these are in theory respectively 11 miles, taking 1hr 27min; 9.5 miles, taking 55min; and 11 ¼ miles, taking 1hr 17min.

The quiet route uses the the Barton Road cycleway, which continues as a shared-use path between Barton, Comberton and Toft (you have to cycle on the road through the villages themselves, which is no great hardship). Then you turn left to Kingston and continue on Crane’s Lane, part of the Harcamlow Way, which is probably a very pleasant ride at the end of a hot summer, but this October was a claggy nightmare of mud combined with fallen leaves which will make any bike with mudguards unrideable. If the local preference is to keep the bridleway for tractors and horses, there is a parallel footpath on the side of the hedge which could be improved to be a permissive cycleway. However I cannot recommend this as a pleasant route to Wimpole in most circumstances.

The fastest route is direct and indeed fast – I can get there in 35 minutes myself – but it cannot be recommended as a route for families and the less confident.

The third route, balancing speed and quietness, is the route I’ve usually taken myself – if you go through the village of Orwell you emerge on the A603 just 200 metres from the Wimpole turning, with a perfectly cycleable footway. However, if you go straight ahead at Orwell church, rather than turning left through the village, you’ll emerge on the A603 further east, with the discreet gate (see photo, below) to the National Trust’s Victoria Drive just to the right (and reachable along the footway too). This charming route is not signposted, nor is it known to the Cycle Streets route planner, but is is shown as a cycle route on a National Trust leaflet (www.camcycle.org.uk/jumpto/nl105nt). It is decently surfaced almost throughout, running through woodland to a gate directly opposite the main entrance to Wimpole Hall. 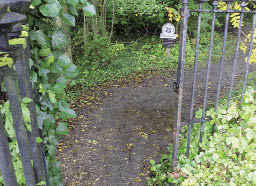 This is definitely my preferred route to Wimpole Hall (although some may find the climb of Chapel Hill, between Haslingfield and Barrington, challenging), but there’s a problem at the other end – the quietest route to Haslingfield is via Grantchester Meadows and Canteloupe Farm, but Trumpington Farm Estates, who own the farm, have become more forceful recently in stressing that only cyclists with written permission may use this route. It is possible to take the Grantchester-Barton bridleway to the M11 and then head south to pass near Canteloupe Farm on a legal bridleway, or you can follow the Barton Road cycleway to Barton and then turn left to Haslingfield. At some point it will also be possible to take a new route parallel to the A10 from Trumpington and then a bridleway to Haslingfield. None of these bridleways is perfect, but in dry weather they’ll mostly offer pleasant riding.

So my challenge for Sustrans, the National Trust and the county’s cycling officers is to work together and produce a signposted route, with some improvements to bridleway sections. It would be wonderful too if the Crane’s Lane route could be made usable as well.