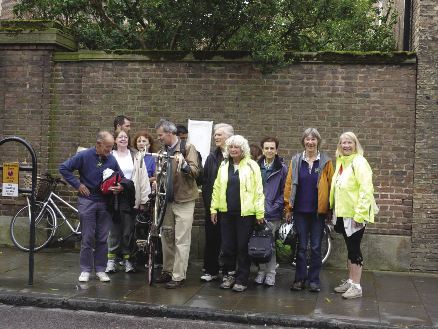 Cycling is easy. Cycling is dangerous. These two commonplaces mark the area where bicycle advocacy works, especially when it tries to reach the half of Cambridge’s population of which does not yet use a bicycle once a week. Hesitant or beginning cyclists perceive the street as a place of uncontrollable danger. Cars are intimidating, they pose a threat that leads otherwise rational and reasonable people to shiver with fear. For many, cycling in traffic is dominated by a pervasive sense of lack of control and power. The shop sells a bike and but may fail to adjust it properly. The streets may have bike lanes but cars park on them. Children will be offered some Bikeability training through the schools, but nobody reaches out to those who want to try out two wheels later in life.

Beth Morgan, who runs the Cycling Club for the University of the Third Age (U3A), wanted to change this. She organised a presentation to disprove these commonplaces: she wanted to show that cycling is NOT easy and that cycling is NOT dangerous. The event took place in August and attracted a small group of a dozen club members. Michael Cahn (League Cycling Instructor) tried to show that the widespread fear of traffic can lead to many intimidating encounters on the street, and he encouraged a sense that the cyclist is part of traffic, engages with traffic, takes his or her place in traffic, and interacts with other drivers in a competent, confident and predictable manner. On the street, communication is key. Traffic, that wild and terrible beast which roams our streets to attack at any moment, is actually easily tamed with a few tricks which require a little mental adjustment, and good control of your bike, especially when signalling and checking for traffic behind. The danger of ‘dooring’ which awaits those who ride too close to parked cars, the multiple dangers faced by those who take refuge on the pavement, the importance of lights and a well-maintained and adjusted bike were presented. The event concluded with a ‘cycle-by’ where the instructor showed off his skill of looking behind while cycling forward. Yes, if the driver behind honks his horn, you can be safe in the knowledge that he has seen you. He will not hurt you. He may be impatient, but that is his problem. Yes, smile at him, but there is no need to accept his suggestion that you take up a position on the road which is unsafe for yourself.

As long as cars and bicycles share the road, educating cyclists on how to control the traffic around them is an urgent requirement. The fearful cyclist who rides his or her bike in an imaginary jungle of wild traffic beasts is actually increasing his or her chances of a collision. The educated cyclist who knows their bike and knows how to communicate with people in cars has a safer and more pleasant experience on the road. Bicycle education is the software which will make our city a better place to cycle. But where is the funding for the extensive education programme that this city of learning urgently requires?

The U3A Cycling Club organises rides for members throughout the year: more details from cyclingu3ac@gmail.com.