Plans for the 3,000-space cycle park at the station, to resolve the intolerable situation there, are nearing submission. As part of our discussions with the developers and the county council, we pressed for a trial of double-decker cycle parking – a form of provision likely to feature heavily in the cycle park – at the station in good time. The double-decker racks have appeared at the station in recent months, and there are four types on trial. Inevitably, they are all being used very heavily because of the massive under-provision here at present. Because of this, we also pressed for a ‘come and try’ day, something which took place in August.

We remain strongly in favour of Sheffield stands as the most convenient and best way to provide cycle parking. But in a building set to hold 3,000 cycles, there would be a lot of walking required with the lower density they provide, and so we consider that double-decker racks would be acceptable, as long as there are also a good number of Sheffield stands.

The trial, and our own observations, seem to indicate that double-decker racks, now used at other stations around London, and very common in the Netherlands, are accepted by many cyclists, though a sizeable minority are unable to use them and would need to use the Sheffield stands. However, unoccupied Sheffields may be difficult to find so there is a strong case for selecting the type of double-decker rack that is usable by the widest possible range of people including children and the elderly.

The county council decided to trial these four types based on visits to other locations in the region and London to view double-height racks. Judging from our five hours of observations on the ‘come and try’ day, there seems to be reasonable consensus that block 1 and block 4 were the best two types of rack. 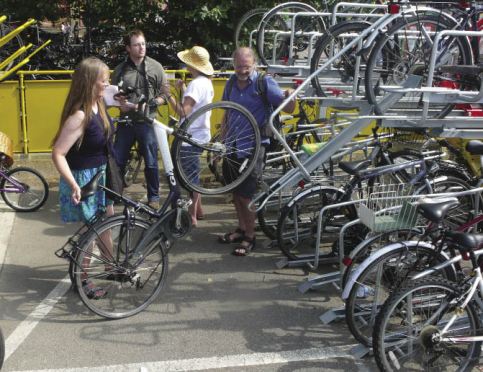 These were clearly liked by many users. The action is very free, meaning that sliding out the lever is easy. These have a bar along the side enabling the frame to be locked easily, and providing additional support. The bar even includes a Velcro strip to prevent damage to the bike’s tubing. The only downside to these racks seems to be that the top lever, when pulled out, ends up very high, so that some users with less strength were unable to use it. The version without the piston was preferred – the piston version is quite stiff and seemed unnecessary since the main lever slid along easily, even with a bike present. Access to the lower row was adequate, but for both rows pedals were occasionally fouled by bikes with panniers, though this is likely to be a problem with all types of rack. 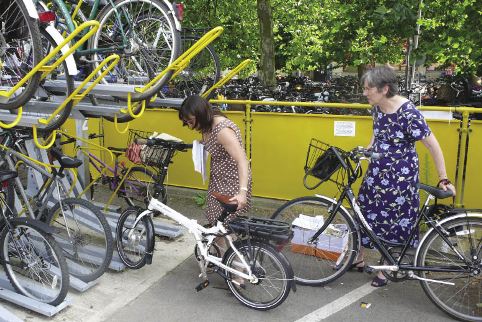 There were mixed views about these bright yellow racks. Many people commented that they appeared over-engineered, with a very heavy action that meant it was harder to pull out than the other racks. One user pulled the lever so that it came out at an angle to one side, which clearly should not be possible. People found the lower row easy to access, perhaps more so than the other designs. However, this design seemed to require the ground to be re-concreted. The handle on the lever was also large, meaning an increased chance of banging one’s head, but the reason for this seems to be to enable a ‘staging point’ for the lifting of the bike, a clever idea. 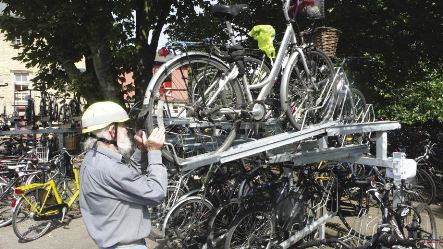 This was the least favoured and one we cannot support, because there is nothing to lock the frame of the bike to, making it insecure. Although the manufacturer could presumably remedy this, it is disappointing that such an obvious flaw (at least in the UK, where theft is a big problem) remains in a released product. The rack also looks to be a more basic design, with one user commenting that it reminded them of the wheeling channel of old bike sheds at school. In addition, the angle of the pull-out lever is steep which prevented some users from getting their bikes up. 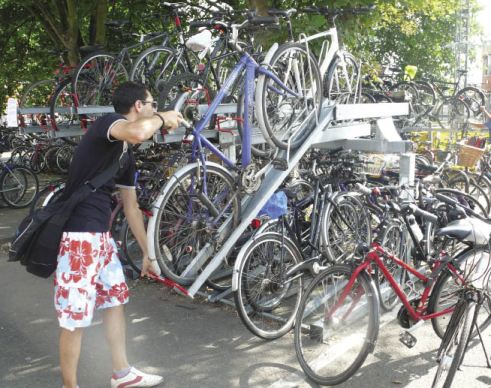 This, along with block 1, was the other favoured design, and is used in other stations so is an established product. However, users were unanimous in preferring the piston version, as the lever is otherwise a little heavy to pull down. The endpoint of the wheeling channel has a gap in it, to help stop the bikes rolling back, but the downside of this is that bikes need an extra lift to get them in, which needs a little practice, though this is not a show-stopper. The lower racks were hard to use as they had been misinstalled. A representative of the manufacturer was present, something that clearly demonstrates their interest in the new cycle park. In general, these racks were liked, and they have an additional advantage in that a back-to-back double version is available, releasing another metre of space and allowing more racks to be packed into the same space.

Racks 1 (Bellsure) and 4 (Falco) were clearly preferred, though some users found that rack 1 required more lifting than they could manage.

Where double-decker cycle parking is used it is vital that the racks are of the type where both upper and lower decks are accessible to the widest possible range of cyclists including children and the elderly. It could be argued that both decks of the piston-aided Falco would be usable by a greater range of cyclists than any of the others. But as some people preferred type 1 to type 4, in our view the cycle park needs a mix of these rack types, while ensuring there are also plenty of Sheffield stands.

We hope to report on the new station cycle park soon and the developer has agreed to give a presentation on the plans to a monthly meeting soon.