In Copenhagen K 17% of households own a cargo bike

Photos taken during this year’s study tour to Copenhagen in May. Cambridge Cycling Campaign’s next study tour will be to Oldenburg and is planned for Saturday 25 – Tuesday 28 May 2013. Campaign members, councillors, officers and the wider public are very welcome to join this informative bank holiday weekend in northern Germany. While Oldenburg has many geographic and demographic similarities to Cambridge, the much larger number of elderly cyclists stands out. This leads to a proliferation of low step-through (or wave-frame) bicycles, on which I hope to be able to report more next year. 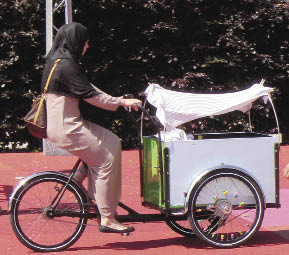 Many Copenhageners use cargo bikes in the same way that British families use cars. The idealised picture is maybe that of a parent singing and pedalling on a Christiania bike with the children in the carrier box singing along. It contrasts with what some educators call ‘Generation Backseat’, describing a generation of children who are often overweight and lack independence, as they are carried from home to school to afterschool activities in the rear seat of a car, while being entertained by electronic gadgets which also shelter them from the world around them. Of course, plugging the offspring into a gadget while travelling is a possibility on a cargo bike, too. 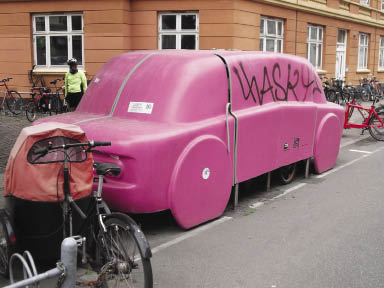 Cargo bikes are expensive and an attractive prey for thieves. Copenhagen is trialling car-shape cargo bike shelters, where a shelter for four cargo bikes takes up the parking space of one (large) car. Local residents will be offered the lockable spaces for rent. These cargo bike shelters may also become part of the gradual onstreet parking removal scheme. 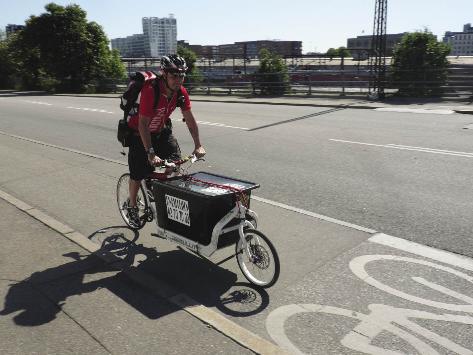 During the study tour to Copenhagen people from Copenhagenize told us that in ‘København K’ (Copenhagn’s Central District) only 21% of households own a car, and 17% own a cargo bike. This must certainly be the highest concentration of cargo bikes anywhere in the world. Cargo bikes are used to transport cargo, but mostly they help carry around children. 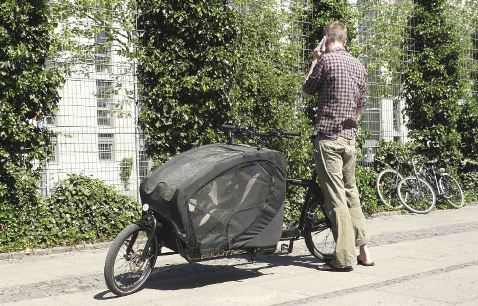 Part of the cargo bike’s popularity in Copenhagen is certainly due to a high population density, lack of parking spaces in the centre and the high cost of cars owing to a 180% registration tax and 25% VAT. Another aspect may be that Copenhagen is a large capital city where many parents want to carry their children in safety, rather than letting them cycle on their own.

Hen party on a cargo bike 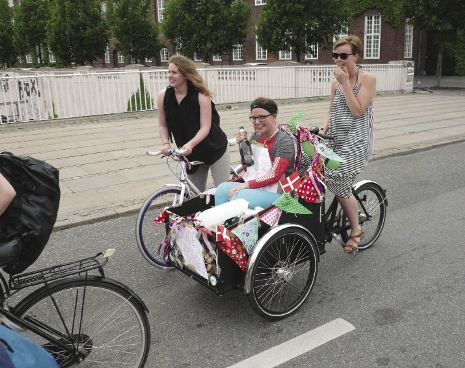 As almost everybody rides bikes in Copenhagen, people do all sorts of trips on bikes. During the Copenhagen study-tour we came across a hen party, with a Champagne-sipping hen on a cargo bike. While I don’t know anything about Danish ‘drink-riding’ laws, a tricycle should help to keep riders upright. 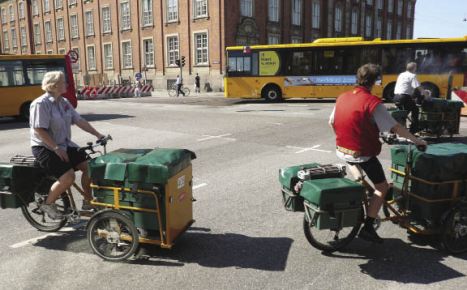 Britain’s Royal Mail has decided to phase out deliveries by bike, replacing their sturdy British- built Pashleys with Vauxhall Combo vans made at a GM plant in Spain. The Danish Post uses bicycles for urban deliveries and in Copenhagen we saw large, electrically assisted tricycles, where the front lid for the cargo area folds down as a ramp, allowing trolleys to be wheeled on and off. The tricycles don’t need to be balanced, facilitating the stop and go that postal delivery demands. Helped by the electric assistance, postmen and women can deliver large amounts of post uphill, with tricycles still small enough to travel on most cycleways.