Three or four years ago when the Post Office decided to put up the annual fee for collecting my post daily from £150 to £500, I decided to look into getting a cargo bike and take the post to the local post office myself. I’m a bookseller, and books are heavy and bulky, so my ordinary Dutch bike was not an option for transport. 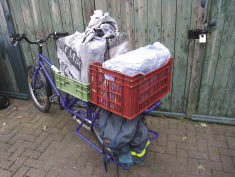 After some research I found the Yuba Mundo, and managed to buy a demonstration model from Bikefix in London for my £500. The new price is now around £950. It is rated to take a load of 200kg. I have fixed plastic boxes on the carrier, but you can get child seats (two, one behind the other) which fit on it. There are also huge panniers which clip on the side. I only bought one, which unbalances the stationary bike when it is full. However, if I had two it might be difficult to get through some of the pinch points on some Cambridge cycle paths.

The bike is long, but easy to ride on its very fat tyres. (It was originally designed for the rough roads of Africa, though I doubt many Africans can afford it.) Mine has six gears, which is quite enough, but the current version has 21. There’s an electric version too, at a price. Practical Cycles (www.practicalcycles.com) sell it in England. I’d also look at Yuba’s own website (http://yubaride.com) and at the many YouTube clips showing the amazing cargoes people have got on to them.

I have given up taking the car to the supermarket – the Yuba holds a decent-sized shop, and it has proved perfect for the post office run. It is a bike I’d recommend, and I’ll gladly show mine to anyone wondering about getting one.