This isn’t about a new vegetarian diet for cyclists, but about why we should get yet another continental idea established in the UK and then do it here.

We’ve long had advanced stop lines for those on cycles and the earliest of these required two sets of signals. Now we need a similar system in which those on bikes get an early start from a separate light, that is, an advanced green light.

When a driver of a motor vehicle is first in the queue, their concentration is on the lights, and they may become almost mesmerised waiting for the lights to change. They may fear that if they look away the lights will change, and they will then get hooted at by an impatient driver. They are unlikely to see a bike alongside. In addition, some 30% of drivers turning left will not give an adequate signal. I get very annoyed by the number of drivers who seem to think that indicators are just to show what you are doing rather than to indicate what you are about to do, despite the guidance in the Highway Code.

Both these factors mean that those on bikes are particularly vulnerable at signal-controlled junctions, especially if they have made their way past motor traffic to the head of the queue.

Don’t stop alongside the first motor vehicle at traffic lights

It was for this reason that Advanced Stop Lines were introduced. The rearmost line must have a gap and through that cycles must pass (in theory).

But there are concerns

Some boxes at advanced stop lines are not deep enough. That means that as you manoeuvre into the box drivers of heavy goods vehicles may never see you because they are high up in the cab and have limited vision low down in front.

It can also be a problem if the approach lane is on the left and you wish to turn right. If there are left-turning motor vehicles you may be in the worst place just when the lights change. Finally, for the slower cyclist, it can be particularly intimidating mixing with lorries and cars at junctions.

So why advanced greens? 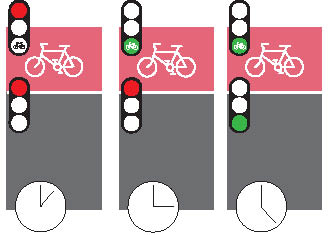 All this means you are far less likely, even if inexperienced, to be caught in a vulnerable position as motor vehicles start moving.

Why here in Cambridge?

We have several major junctions with high flows of both cycles and motor vehicles, all with complex turning movements. These junctions are intimidating for the less experienced. If advanced greens were installed, more would be happy to cycle, or permit their children to do so. Crossing the inner ring road at the foot of Castle Street, at the Catholic Church (Hyde Park Corner), and other locations would be far easier with advanced green signals.

So why not now?

Although the Department for Transport has said they will be allowed without the need for a physically separate lane, that requires legislation, so we have to wait several years for general permission.

Special permission can be granted, but the work and time normally required means that local authorities are reluctant to go down that road.

The funds now offered by the Department for Transport to make junctions safer for cycling make a good case to press for special permission, and we have written to them with suggestions.