The Bike Harvest set out to make it easy for students leaving Cambridge to donate their old bikes to charity rather than leaving them chained to a post. The local charity OWL would then refurbish the cycles and sell them back to students. We could then help employ some disadvantaged people and recycle at the same time. 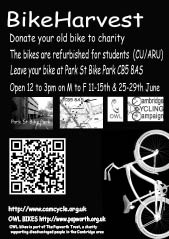 I knew that the hardest part to achieve would be to get the message to as many students as possible. I estimated that 1% might donate. Promotion was channelled through the Cambridge University Green Officers and the Anglia Ruskin staff member responsible for sustainability. We used email, web sites, posters and newsletter articles, but no social media.

After being open for donations for two weeks we were not overwhelmed, a total of just three bikes were donated. As the principal aim was to collect bikes, I regard this as a significant failure. The most difficult aspect of holding a new event is trying to ensure people know about it. I guess we might have reached 5% of the student population. I did derive some benefits from the event: one is the importance of thinking about the point of view of the person we are hoping to involve. The kind of person who abandons a bike is not the sort who donates one. I also gained a much better insight into the management of bike parking by the universities. A better use of volunteer time would be to improve the regular removal of abandoned bikes from around the city.

I am very grateful to Cathy Shortland from OWL for supporting us and I have seen how this charity enhances the lives of those it serves. I would also like to thank Carla Shaw of Anglia Ruskin University, and the City Council for use of its bike park.