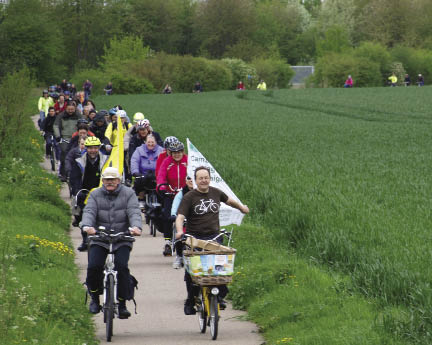 The Met Office’s message for this year’s May Bank Holiday was clear: cold and wet. And so a smaller group than last year, 168 at our official count at Stow-cum-Quy, joined the Campaign’s ride. The Mayor of Cambridge, Ian Nimmo-Smith, gave an excellent speech about the history of the fair and cycling in Cambridge, sending us off from the Guildhall under an overcast sky. With a number of riders joining later and along the way to Reach, the count nearer the fair passed the mark of 200 bikes. The recce group had done a stellar job the previous Saturday and the route was clean and clear and all riders arrived in Reach without major incidents. Despite the weather a good number of families had joined the ride with children of all ages on child seats, trailers, trailing bikes, bakfiets, tandems or pedalling all the way on their own bikes. 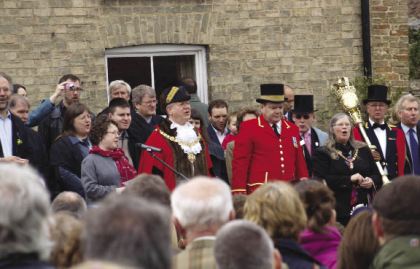 The weather held fine for the traditional opening ceremony of the fair, led by the Mayor, who had cycled to Reach wearing the specially made mayoral bike chain. A number of other Councillors also joined the ride in support of Cambridge Cycling Campaign’s bid to get more people on two wheels.

The return ride started with a persistent shower and riders without waterproofs were left soaking wet. However, the rain stopped and when we reached Cambridge my clothes had already dried. 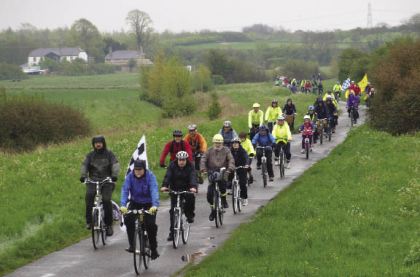 Very many thanks to all volunteer marshals for doing such an excellent job of making this a friendly and fun event. And also many thanks to Campaign members for promoting the ride with friends, in clubs and at the workplace and to the Mayor and Councillors for supporting our aims.

Participants took many photographs, many of which can be seen online and can be reached through links at http://www.camcycle.org.uk/events/rides/

Chloe: “On the long way to Reach, my mother and me had an uninterrupted talk. All this cycling to see a fair.”

Bruno: “This was the fourth time we came to Reach by bike and I really liked that you waited for people lagging behind.”

Garris: “I couldn’t believe we cycled as long as a marathon is, going to Reach and back. I’m proud of doing it.”