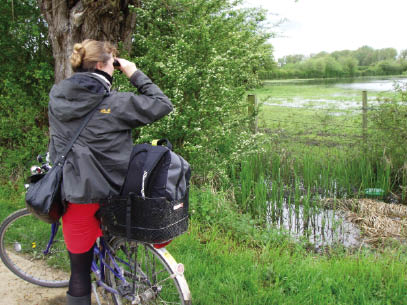 One of the benefits of cycling to work is the ability to do your own ‘Springwatch’, especially if you cycle across the commons or near the river, or indeed anywhere there is little enough heavy traffic that you can put some of your attention into observing other things; so hopefully those of you using the cycleway by The Busway, for example, may also be seeing and hearing interesting things.

I must say the sound of the first chiff-chaff of the year was very welcome, as has been their chiff-chaffing almost every morning since! If you do cycle along the river, watch out for the common terns. The highlight of my first sighting of the year, which cheered me enough, was the bonus of the bird immediately diving straight into the water and coming up with really quite a large fish in quite spectacular manner! The other morning there was a pair patrolling and I’ve seen them all the way from Baits Bite Lock to Midsummer Common. Whether it’s the same birds, who have a large territory, or different individuals, I don’t know. I must say they’ve made me forget horrid headwinds or torrential rain, both of which we’ve had a lot recently, which normally threaten to make me thoroughly miserable.

I’ve not seen, as of the beginning of May, many swallows, perhaps one or two, so I’m not convinced that they’ve properly returned. Given the cold and wet April we’ve had, they’ve probably made the right decision. However, on the first day of May, after such a foul wet cycle ride in the morning, it was rather good to see a good lot of swifts high over the river on the journey home. And I’ve finally heard and seen a whitethroat. Perhaps at some point I might be cycling in shorts and a skimpy top, rather than full rain gear including wellies!

It’s lovely to see the cows back on Midsummer and Stourbridge Commons. It’s good that some people are using their Commoners’ rights. I had a rather closer and slightly alarming encounter with wildlife the other morning, when a squirrel dashed out of a garden and straight under my front wheel! It then ran away, despite me stopping to see what damage I’d done, so squirrels clearly are as indestructible as they are clever. Normally, like the one another morning that I had a near miss with, they do a very rapid U-turn, quicker than lightning, so I really was surprised actually to hit one.

Another cheering sight and sound, especially if it’s not such a nice morning, or I’m feeling tired, is cycling past the old Penny Ferry/Pike and Eel pub, which seems to be home to many house sparrows. I hope any redevelopment plans take this into account, as sparrows have alarmingly declined in numbers recently, probably directly owing to habitat loss. The sparrows continue until the Green Dragon, as there are lots of bushes and hedges on Water Street, and sometimes I hear them on Riverside. Recently, some seem to have taken up residence on some guttering in Fair Street, which previously hadn’t been a particularly interesting bit of my journey.

My journey then takes me across to the Catholic Church, where, rather inappropriately, I always say ‘I enter Hell’, although the improved railway bridge on Hills Road is now no longer purgatory. So my observations are somewhat thin for the rest of the time. However, several times I have heard, but never seen, as I’m paying far too much attention to the traffic and road, a gang of long-tailed tits somewhere near Cavendish Avenue. I think I’ve heard a woodpecker on the same stretch, probably as many of the houses still have their lovely mature trees.

So perhaps more of us, especially if we’re getting bored with the same old route day after day, should keep a notepad at our destinations to log the changing seasons? It’s certainly given an added richness to my daily routine.