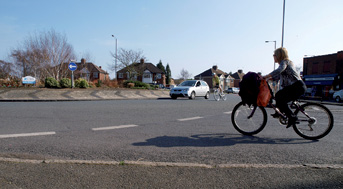 Cambridgeshire County and Cambridge City councils have been consulting on safety improvements to the Radegund Road/Perne Road/Birdwood Road roundabout. These aim to make the roundabout safer and more cycle-friendly by narrowing the lanes around the roundabout, meaning traffic will have to drive more slowly. Cambridge Cycling Campaign is in favour of measures to make this roundabout less hostile to those on cycles, though we are not all agreed that what is proposed is the best possible solution. But we are in favour of measures to reduce the speed of motor vehicles along Perne Road and believe that this will achieve significant safety gains, which is positive. The consultation period has now ended and the scheme will be considered in June and July, with construction work, if approved, starting in autumn/winter 2012.

We have submitted comments, along the following lines, to both county and city councils and expressed our concern that the measures are insufficient to make the junction feel safe enough for less experienced cyclists to use it. Some of our members feel that the design will still result in points of conflict between cyclists and motor vehicles. However, we accept that when speeds are lower the sense of danger may be reduced.

We know that cyclists will have different reactions to the design depending on their level of confidence. Some will feel comfortable to control the lane at the ‘pinch-point’ entrance of the roundabout, others may prefer to dismount or seek a bike bypass or escape route. However, at this location there are no off-road cycle paths to connect with the bike bypasses, and we are not in favour of anything that encourages cycling on the pavement.

While we understand that the design is modelled on Dutch roundabouts, which have a good safety record, we do not believe that the Dutch would use a roundabout in the context of a major traffic artery like this without more specific separate provision for cyclists.

It may be that traffic lights would be a more effective means to manage the flow of traffic. However, we recognise that this would be a much more complex project.

We note that pedestrian crossing islands with lowered central areas are proposed on Radegund Road and Birdwood Road, which mean that people wheeling bikes do not have to bump them up and down the islands. We wish the same provision to be provided on the two Perne Road arms, in addition to the two existing pedestrian crossings which are further away. While the islands are useful for pedestrians, they can also be used by less confident cyclists. They should be large enough to accommodate a bike being wheeled, a wheelchair, a mobility scooter or a pushchair.

With the proviso that islands are provided on both Perne Road arms of this roundabout as described above, we would like to offer our measured and cautious support to this change, on the understanding that it is experimental, and that if, contrary to expectations, it makes matters worse for cyclists, remedial measures will be undertaken.

We would also urge that the design and construction should not preclude further improvements, for example, bike bypasses for those turning left, at a later stage.

Members of Cambridge Cycling Campaign made these points at a meeting with officers from the city and county council, as well as representatives of CTC, on 16 March. We await with interest the results of the public consultation and any consequent amendments to the scheme.