We need a third cycle park for the city centre! It’s a long-term project. We all, cyclists, councillors, council officers and traders, need to start thinking about it now.

In a motion to be discussed by the county council soon, there is explicit recognition of the importance of cycling to the economic well-being of the city. It follows, therefore, that shortage of cycle parking space is having economic consequences for the city.

In the thirty years I have lived in Cambridge, there has been a desperate search for places where more cycle parking could go in the city centre, competing against all the other needs for space in a concentrated environment. There have been a few places found here, a dozen there, lots around the Guildhall, but in the tens not the hundreds or thousands.

Then we made a big stride forward when Simon Nuttall, in his rôle with the cycle theft reduction project within the Police, and with co-operation from the city council, was able to establish the Park Street Cycle Park in the basement of the car park. A very large number of spaces was created at one go.

The cycle park was a novel concept for Cambridge, although based on solid experience from European examples. It got off to a slow start. Being a little off-centre, it took quite a while for people to discover it. However, it has become well used over the years, despite its less-than-ideal location, and helped by the presence of the Cycle Ambulance repair shop. The concept has been validated.

More recently, the Grand Arcade cycle park has shown the same trend. It was underused for the first year as people began to learn about it. Use increased when direction signs to it went up in St Andrew’s Street. If the entrance had been off St Andrew’s Street in the first place, it would have been better used from the start. 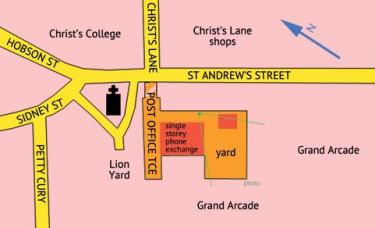 It could have been worse though. The county council bitterly opposed proper access to it from both directions, and only gave way after an immense amount of work by us. We had a lot to do with getting a cycle park written into the planning requirements as well. The 500 or so spaces were a big advance even on Park Street and were located in the heart of the city centre. They should have provided decent capacity for a few years.

But, in fact, only about 230 public spaces were provided. The other spaces are reserved for use by the bike shop. Useful as this is, to have half the spaces commandeered was a bitter blow. The consequence is that cycle parking demand has once again outstripped supply and at busy times of the week and the year the Grand Arcade cycle park is now full. The signs now plastered along the corridors telling you not to park there are clear evidence of the lack of space.

It hasn’t helped that other new developments in the centre, notably Christ’s Lane (which replaced Bradwells Court) were let off their requirement to provide cycle parks on the basis that the Grand Arcade park was there.

Of cabbages and kings

So the time has come to develop a third cycle park for the city centre. Undoubtedly, such plans are fraught with difficulty, and some people’s reaction is immediately to look for reasons why it can’t be done. But there were problems with the previous ones which were overcome. It’s hardly a task on the scale of Crossrail or the Olympics, and the government is doing those. Yes, there’s money to be found, and space to be found, but we have to do it if the demand is to be satisfied. And actually in the long run it helps with space as it reduces need for central car parking spaces (and also Park & Ride buses).

Where could it go? Surely there is no room in the centre for another 500 cycle spaces in one place? I beg to differ.

One possibility would be to put it underground. This has been done with much success in numerous Dutch and German cities. We saw an underground cycle park on our field trip to Münster ten years ago. Car parking under Parker’s Piece has been seriously mooted over the years, but really it is just as inappropriate and in any case too far from the centre. Other underground locations would be extremely expensive anywhere you couldn’t cut and cover.

I think there is a location that could work above ground. This is Post Office Terrace, a site that goes unnoticed in the very centre. Just to the south of the path up into Lion Yard from St Andrew’s Street, Post Office Terrace is a little service road that leads into a yard. In the middle of the yard, is a single-storey building housing a telephone exchange, and the rest is surrounded by the shopping centres.

I think we could use that yard better. Yes, there will be ownership issues and security issues. But let’s not look for reasons why we can’t do it, but ways we can. Vehicles may still need to use the yard so it may need a platform arrangement so that either the vehicles or the cycles are at first-floor level. Or, better still, let’s use the large area of flat roof space on top of the telephone exchange.

And if it really, really isn’t possible then the question for politicians is, just where would you put it? Cycle parking in the city centre is critical to its vitality, and after a few years of grace, it is a critical problem once more.