Why, despite even the worst weather, I’d prefer to cycle to work

I started to wonder, over the Christmas break, why, despite the fact I was having a really nice holiday, pottering around the house, watching TV, eating nice food and the like, I was going a bit stir crazy. I was finding I was getting to about 3pm and having to go out for a walk. 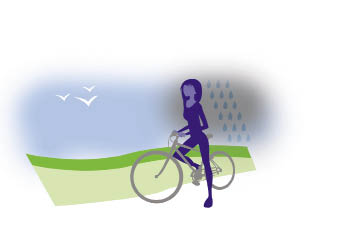 Then we got to the end of the holiday. The first day back to work was foul. My 45 minute commute took me an hour and a quarter, as I was stuck in first gear most of the way, battling against the gale. However, by the time I’d had a sit-down and caught up on emails when I got to work, I felt in a better mood, and had a fairly productive day, even if in that slightly brain dead post-Christmas way. I didn’t get that feeling of panic I’d been getting every day of the holiday as it started to get dark. My reasoning is that I’d had my dose of fresh air, and, somehow, that had done me psychological good as well as presumably burning some calories. If I’d driven or even got the bus to work, I’d not have had this, although I’m sure it would have been, on the surface, more restful.

Is it just fresh air?

So, is it just the fresh air, or the fact that also I think I see and hear more than those contained within vehicles? Certainly, you don’t get to interact with anyone at all. On my commute, there are two or three regular walkers to whom I now at least say hello. Part of my route takes me near the river, so I can see what ducks and swans are hanging around. The escapee American wood duck that confused me one day on Riverside certainly added entertainment to my week, even if it did make me late! In the autumn, I got held up by making sure it really was a pair of jays in a tree on Midsummer Common. Sometimes, during the winter, I can actually catch a glimpse of all the pied wagtails which seem to peck around on Parker’s Piece, but most of the time I have to be content with hearing them, noting the large number of gulls which seem to congregate there. They leave less litter than summer picnic parties. There is a gang of long-tailed tits between Homerton and The Perse on Hills Road. I’ve still not seen them, but frequently hear them. In the summer, hopefully I’m topping up my vitamin D levels. If I was in a vehicle I’d get none of this.

As it’s a Saturday, I’ve spent all day inside the house, doing chores, and a really productive day it’s been. However, I’m now feeling that slight sense of disquiet as if I’ve wasted the day. Is it because I’ve not been outside, and had a decent dose of daylight and the sounds of the world all around me, rather than what just comes through the window?