We made passing reference to shared-use footways (where cyclists are allowed to ride on the pavement alongside a road) in the manifesto published last year, of which most of you should have a copy. However, we are still finding that the engineers’ first reaction is to try to mix cyclists and pedestrians. Therefore I felt it was time to try to expand on shared-use in a policy for the Campaign. This was brought into focus by the proposals for Barton Road, and an article in the Cambridge Evening News last November where residents in Queen Edith’s Way are being told they have to put up with cyclists on the pavement. What follows is a draft of such a policy and I would very much like to hear your views on it. Please phone, write or e-mailto me. We will discuss it at a future Campaign meeting and possibly a subgroup depending on how strongly people feel. Just to reiterate, it is not yet an adopted policy, but does, I think, reflect many of the views I have been hearing since the Cycling Campaign started.

Footways alongside roads shared between cyclists and pedestrians are sometimes a solution to a particular problem. But more often especially in urban areas they are poor quality facilities which:

Provision for cyclists shared with pedestrians may be more appropriate in some circumstances:

Pedestrians feel threatened by the close proximity of cyclists. This threat may be more perceived than real. Casualties caused by motor vehicles are statistically more common and more serious. Collisions that do happen between cyclists and pedestrians are usually minor. Even so, pedestrians continue to feel threatened.

Footways are pedestrian “territory”. Pedestrians resent this limited space being invaded by cyclists. This leads to hostility and resentment by pedestrians towards cyclists. We know of cases of pedestrians verbally abusing Cycling Campaign members cycling legally on shared-use footways. Pedestrians often react badly to being alerted to a cyclist’s presence by a bell. It is sometimes suggested that courtesy is the answer to this problem. We do not believe this. On the whole, pedestrians resent the presence of cyclists in their areas even when they are well behaved. People seem to behave worse when they become road users, whether on foot, on a cycle or motorised. If courtesy were the answer, then action needs to be taken to reach the discourteous. It is not clear how this could be done.

Most shared-use footways in Cambridge are just footways on which cycling has been permitted. Typically the only work that is done to support this status is to provide dropped-kerbs where cycles are expected to join or leave the path or cross a sideroad. Until recently even that has not been done properly. As a result most shared-use is extremely poor quality provision.

Most shared-use footways are very uncomfortable to cycle on. With the notable exception of the Barton to Cambridge path, even those recently and specially constructed or surfaced are undulating and punctured by tarmac cones formed by weeds. Repeated cycling on such surfaces loosens and damages parts on bikes. Rough and undulating surfaces mean that cyclists cannot travel at their natural pace.

Most shared-use paths are far too narrow. They were not intended to take cyclists. It is often not possible to pass a pedestrian who is walking in the middle of the path, or groups of pedestrians or other cyclists. Unlike the road, there is usually nowhere to go to avoid them. 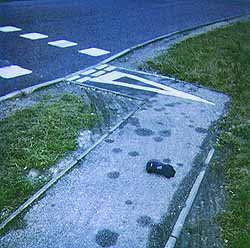 Many shared-use paths are blocked by obstacles. Cars and delivery vans frequently pull up onto a path instead of parking in the road. Maintenance vehicles and contractors often completely block paths (inconveniencing both cyclists and pedestrians). Lighting columns, traffic signal controllers, wheelie-bins, trees and street furniture are commonly scattered along a path making even narrower or blocking it totally.

Shared-use footways are punctuated by side-roads at which cyclists are expected to give way to other traffic. Cyclists lose the right to priority that they would naturally have on the road. They have to continually stop and start, which takes significant physical effort. They also must bump up and down. Frequently, crossing a side-turning involves two very sharp left and right turns, either because of the sweep of the kerb, or by design in order to provide visibility.

Shared-use footways often abut hedges and walls so that visibility is limited at the frequent driveways many of them pass. This is hazardous. Because they are at the edges of the street, they often suffer from hedge-clippings (leading to punctures) and accumulation of leaves in the autumn (slippery). They are rarely salted in winter.

Motorists are significant beneficiaries of shared-use footways, to the detriment of cyclists and pedestrians. This should not be the case in age when cycling is to be encouraged and motor traffic limited for environmental reasons. Motorists have fewer cycles to get in their way on the road, so can drive faster. Shared-use footways encourage some motorists in their opinion that cyclists should not be on the road at all. Motorists gain priority over cyclists at side-roads.

Less confident cyclists may feel more secure when using a shared-use footway. In Cambridge, however, it will never be possible to provide an environment for cyclists which is separate from cars. We consider that the minimal separation provided by shared-use footways may put these cyclists at greater risk when they must mix with other traffic because their lack of confidence is reinforced by mixing less. In some cases they lose confidence using the road at all and may either stop cycling, or feel limited to the small area where they are confident to cycle. For some cyclists, widespread conversion to shared-use may have increased their perception that cycling is allowed on any footway, or they know it is not but choose to ignore this, in order to avoid obstructions or because they do not feel safe on the road. Cycling on non-shared footways is common. It is a strong source of antagonism between pedestrians and cyclists (including those who do not break the rules).

Queen Edith’s Way: The traffic signals at Cherry Hinton Road have no provision for cyclists at all despite the two shared-use footways leading up to the junction. The roundabout at the junction with Mowbray Road is hard to negotiate west-bound because of the very limited visibility. Yet provision for cyclists ends about 5m before the roundabout, and in a position where it is impossible to get into the right hand lane or centre of the left hand lane if there is any motor traffic. 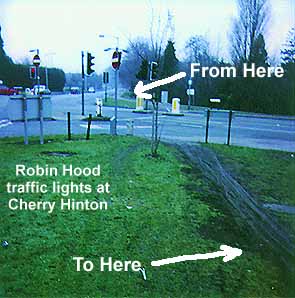 Most collisions occur at junctions. However, shared-use provision is almost never accompanied by provision to make junctions they lead into safer.

Shared-use footways nearly always end just before major junctions. Furthermore, they are often badly placed to lead a cyclist into a junction: the cyclist nearly always ends up on the far left hand side, from where it is very difficult to turn right, and not the position on the road we would often encourage for straight on movements.

It is often unclear what a cyclist is intended to do on leaving a shared-use footway. Consider, for example, trying to travel straight on from the shared-use footway on the north side of Cherry Hinton Road into Fulbourn Road.

Approaching a junction, motorists are concentrating on the junction, and are often not aware of cyclists joining the road from the footway.

One reason often given for allowing shared-use is in providing safe routes to school. However, we do not consider that shared-use on its own is ever sufficient to constitute a safe route to school. Furthermore, child cyclists should no more have to put up with the poor quality surfaces, obstructions, and deviations of shared-use footways than should adults.

Safe routes to school should always be developed in partnership with the school. One of the main targets should be the immediate area around the school where vehicles are concentrated, especially parents bringing children to and from school, but mixing cycles with the car passengers outside a school is chaotic.

Trumpington – Foxton. This recently constructed facility is 1m wide for most of its length and as little as 50 cm in places. It is undulating and weedy. It requires cyclists to dismount for 20 m. It has absurdly sharp bends. 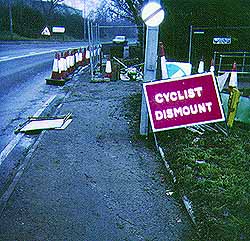 A better case can be made for shared-use provision in rural areas where there are few pedestrians, fewer potential obstructions, side-turnings and driveways, and the path can often be purpose built. However, this has not prevented very many such facilities being built with all the faults of their urban counterparts. Many are far too narrow, usually extremely uncomfortable (including most purpose-built paths), and do not address junctions well, especially at their ends.

Newmarket Road, City Boundary – Quy interchange tunnel. This popular sign-posted rural cycle ride is narrow, has bumpy dropped kerbs, is in very poor repair, and requires cyclists to cycle through a lay-by against the traffic.

Cycling has traditionally been permitted on Cambridge Commons and other open spaces. These paths form very useful off-road links where cycling is a pleasanter experience. The adjacent grass usually means that conflicts can be avoided more easily. However, surface quality and width are still of concern especially where there are many pedestrians; these concerns need to be balanced against environmental intrusion in such areas.

Where shared-use is permitted we think that it should meet stringent minimum specifications.

In general, these can be summarised by saying that shared-use should not mean that cyclists or pedestrians are inconvenienced to any greater extent than they would be were cyclists to use the adjacent road.

Width:
2m is the absolute minimum for a two-way shared-use footway in rural areas and is inadequate in urban areas, where a segregated path is preferred allowing at least 2m to cyclists.

Surface:
this should be smooth, which appears to mean machine-laid, since nowhere in Cambridge have we found a hand-laid surface to be satisfactory. Experiments are required with membranes to avoid weed problems without the use of environmentally damaging weed-killers, use of which is in any case not permitted by Council policy.

Dropped kerbs:
should be absolutely flush with the road. A quarter circle profile is unsatisfactory. Quality control on installation of dropped-kerbs is clearly inadequate.

Side turnings:
paths should have priority over side roads.

Obstructions:
paths should be clear of trees and street furniture. Bollards should be placed at points vulnerable to parking vehicles.

Access:
there should always be dropped kerbs opposite all turnings.

Junctions:
should always be considered when installing shared-use footways.

Maintenance:
shared-use footways should be cleaned with the same diligence as the roads. They require to be cleared of hedge-cuttings and broken glass, to which they seem to be especially vulnerable. In icy weather, gritting is essential.

Over time, shared-use footways have changed from being an occasional provision where there was a wide enough footway which formed an obvious link, to being the provision of first choice. This has resulted in many kilometres of shared-use footway being designated which are unsuitable. This has resulted in an abrogation of responsibility to provide properly for safety on the roads for cyclists. It has fostered a still-growing resentment between pedestrians and cyclists while motorists continue to benefit.