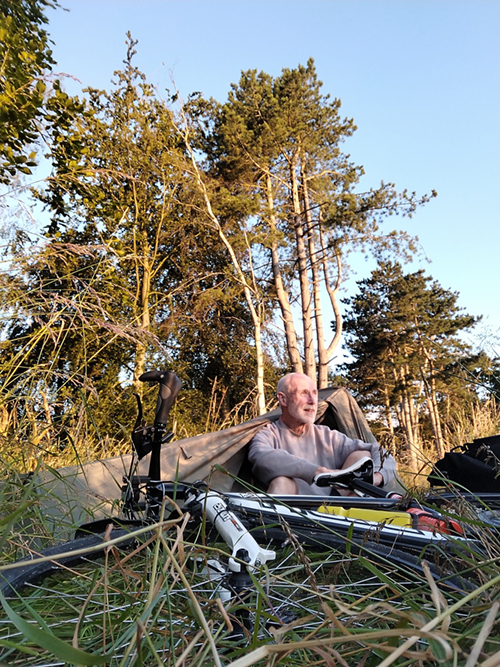 It’s great to get to know the local roads, and my rides have enabled me to enjoy lots of beautiful places that I’m familiar with around the city and the county, but I do like a bit of exploration! I bought a used mountain bike last summer and it has opened up two great new experiences for me.

The Ordnance Survey maps show many bridleways and rights of way that take you off roads and across country on a bike. I started with the Roman Road from the Gog Magog hills to Horseheath and several routes leading out from the Wilbrahams. Some are easy and open, others muddy, bumpy and brambly (not so keen on them!) but I’ve travelled into the depths of peaceful countryside and encountered sights of wildlife and views of tranquillity that I’ve never seen on the roads – it’s like dropping into a different world, and home in time for tea! I can also link up previously separated road routes with a change of perspective that enables me to appreciate them anew.

Then I bought a tent! I’d not camped for 40 years and things have come on a bit since then. I experimented with a couple of nights on the back lawn (the neighbours’ doubts about my sanity were confirmed) before loading up to experience a local campsite. An evening meal and a breakfast on my little stove and a good night’s sleep in between: I was hooked!

I’ve been stretching my wings since then. I’ve been as far north as Beverley in Yorkshire and followed the National Cycle Network Route 1 to the Norfolk coast before I had to appear at home for my wedding anniversary! I also rode west to cross the Severn to Chepstow and then up through Wales, nearly half way to Anglesey before cutting for home in the face of torrential rain in the mountains. I’ll be back with some better kit to complete the ride to Anglesey next summer!

I appreciate the attractions of a proper bed and more substantial accommodation (and I can use a B&B if I want to) but I set out with bike and tent every morning, free to go wherever I want, not knowing where or how far I’ll go, where I’ll eat, where I’ll sleep or how the day will unfold. There might be places to visit or sights to see. I might put on the miles or laze in the sun. I’ve met some fascinating people and I can plan and re-plan as I go. People ask what I think about all day: always the road and traffic, then the views, the crops, the wildlife, the buildings, the birds, the weather forecast, the bike and that fixation for everyone on a cycle ride – tea and cake! 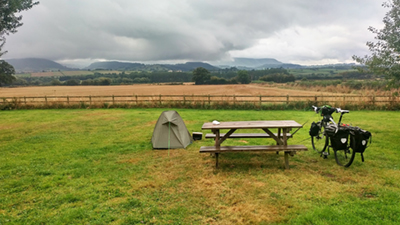 I have wild-camped but I much prefer to ask permission and have been warmly welcomed in several different places. I have used a few campsites but they are increasingly aimed at caravans and camper vans whose occupants typically watch TV till late at night when I want to sleep – and I have found myself unable to get out of locked gates until 9am when I get up with the dawn and want to get a few miles in before breakfast. A hot shower is nice though! But wherever I camp I leave only flattened grass – no other trace of my presence at all, ever. And I can ride on any right of way, track or bridleway, but not footpaths. The UK’s tourist destinations have been overloaded these last two staycation years, but I’ve had a wonderful time and haven’t seen the crowds at all. Now for next year I’m going to finish that Wales trip and I’m planning Land’s End to John O’Groats, maybe continuing to Orkney and Shetland. That will stretch me and I’m old enough to know better, but it’s such fun!